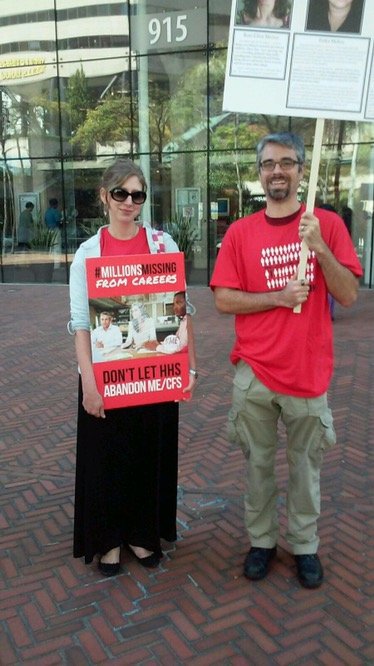 Tuesday was a bittersweet day. I felt the hype yet I was hundreds of miles away from the excitement. Masses of protesters gathered in 25 cities all over the world and many, many more took to social media. From a distance I could tell all of the protesters brought something unique to the day’s events. One brave woman, Janet Eastham, stood outside the Department of Health in London completely naked holding a sign saying “YOU CAN’T IGNORE M.E. NOW.” The use of “M.E.” was, of course, a double entendre referring to how the government cannot ignore a naked body standing on the street, and in turn, cannot ignore the disease (M.E.) afflicting that body.

Coincidentally, as the tweet went out, Sonya Heller Irey was about to make a passionate speech on the steps of City Hall in San Francisco, detailing the 900-mile journey she made to see a Bay Area MECFS specialist, the closest to her home. But Sen. McCain wasn’t the only politician mentioning MECFS on social media. Senator Thom Tillis of North Carolina had this to say:

Meanwhile, other members of congress chimed in:

As I watched all this happening via my tiny iPhone screen set to grayscale to protect my eyes, I felt the urge to get involved. So I used my limited ability to message politicians on Twitter. First I started with Senator Cory Booker from New Jersey. Years ago I saw a documentary when he ran for Mayor of Newark. So back in 2010 I sent him a message, and to my surprise he wrote back:

Then he followed me. So naturally that made us best friends, right? I mean forget about the nearly 90,000 other people he follows on Twitter. Yeah, I know, we’re definitely BFFs. So I figured since we were such good pals he would reply right away. He didn’t. I’m still waiting. Hey Cory, I’m still waiting . . . .

Eventually I moved on and sent similar messages to California Governor Jerry Brown, and Senators Barbara Boxer and Diane Feinstein, even former San Francisco Mayor and current Lt. Governor, Gavin Newsom. And guess what? None of them replied. And now I’m thinking about unfollowing (breaking off my friendship) with Cory Booker #SorryCory.

As disappointing as it was not to hear back from these big names in the political arena, it was encouraging to see news coverage at some of the protest sites. And to hear several luminaries from the MECFS community. As I watched short videos of the speakers I realized that each brought a different and equally valid point to the need for MECFS awareness.

In a small community in Massachusetts, Erica Verrillo, whose book Chronic Fatigue Syndrome: A Treatment Guide sits on my bedside table, and a “small, but fierce” group of protesters gathered to make local government see the disease’s awful nature.

Simultaneously author Hillary Johnson spoke in Washington D.C. about the history of the disease, and in her own way made it apparent that these protests need an uninformed audience. Which is how she prefaced her speech geared toward the general public, not preaching to the choir. My friends Ryan and Stephanie from the Blue Ribbon Foundation were also on-hand in D.C.

And in Chicago, Leonard Jason brought up a bevy of facts based on his research at DePaul University. He mentioned that 72% of a 900-person sample did not have access to an MECFS specialist, a point which spoke to Sonya Heller Irey’s arduous trip to San Francisco. Jason also mentioned how 90% of people with MECFS are undiagnosed and 25% are house- or bed-bound, which costs our economy 18 billion dollars a year. These sufferers are dying 18 years before the average person and the symptoms are often worse than cancer or chronic heart disease. Jason suggested that one of the biggest barriers to MECFS awareness is ignorance by medical schools. According to his research only 6% of the 70 medical schools he looked at taught adequate information about the disease.

As powerful as those facts were, it was the San Francisco site, a three-hour drive from my home, which held perhaps the most noteworthy speeches. Dr. Eric Gordon summed up the nature of the disease in a way few doctors can. Mainly he noted that while people with MECFS may suffer from the same symptoms it is possible, even likely the disease starts in different ways. For instance, my case started with mono and the virus that causes it and other underlying issues, while other people have no evidence of any viral infection.

Then there was Janet Dafoe, whose son, Whitney is as sick as I was at my worst a year ago, unable to speak, eat, or get out of bed. She spoke powerfully about the struggle her family has endured, especially Whitney.

Finally Whitney’s father, Dr. Ron Davis spoke and opened my eyes to a few things. First he clarified why the need for research funding is so great and why the need is specific to the government. He explained that while private funding for MECFS (the vast majority thus far) is greatly appreciated, government funding is much more dependable and consistent. He said it allows researchers to hire long-term help and set reliable timetables. Another thing he mentioned was his expeditious search for not only a biomarker but for treatments. What was, in my opinion, the most hopeful moment of the day came when Dr. Davis talked about how his team at Stanford is trying to skip over the need to develop a new pharmaceutical treatment, and consequently a clinical trial which can take years, to instead test existing compounds on cells consistent with MECFS. Thousands of these tests can be done in a single day, and in what was also likely the most optimistic statement of the day, he said “In our freezer [at Stanford] we have every drug that has ever been approved by the FDA. We will try them all.”

Now that’s what I’m talking about! I must say, stuck in bed perched atop my wedge pillow staring at a grayscale phone screen that looked more like a moving x-ray than a video, Dr. Davis’ words gave me chills. I know they don’t guarantee a cure, but they do guarantee progress and that’s something the MECFS community has not seen in a long time, if ever.