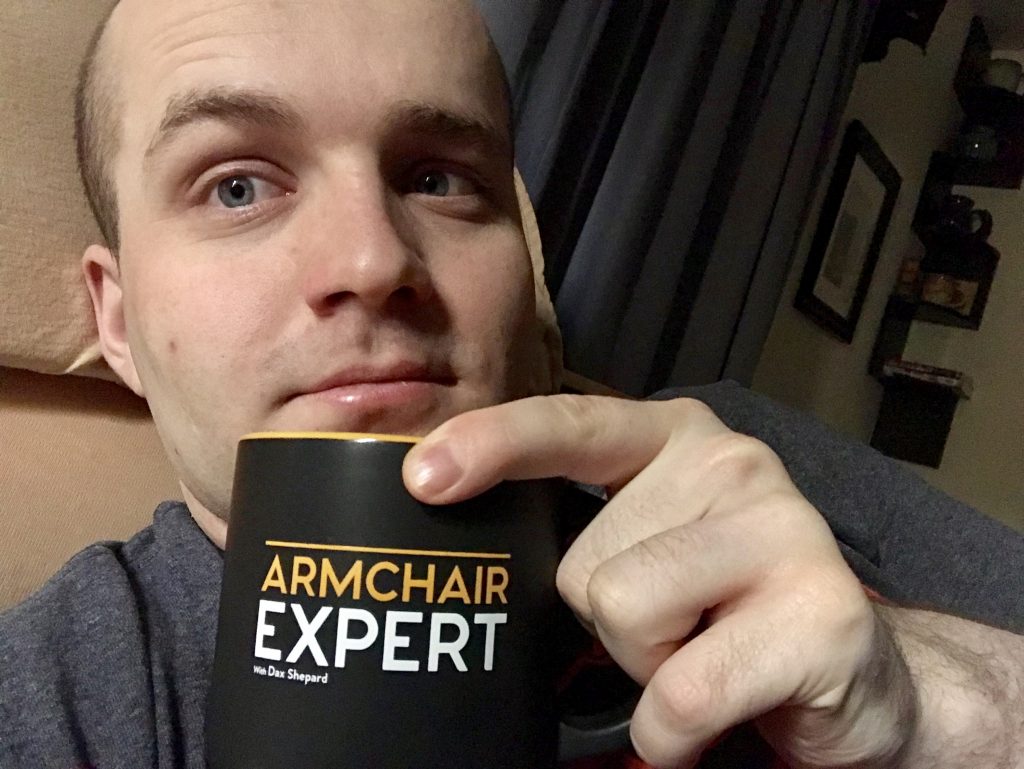 After Afflicted came out on Netflix, I was really disappointed about how people with chronic illnesses were depicted and treated by the production. The whole experience left me feeling angry at the wasted time and energy I put into the project, but even more, I was angry at the damage the show did to legitimizing MECFS, Lyme disease, and other illnesses. In many ways it felt counterproductive in terms of how the general population sees chronic illnesses. It also left me wanting to undo or somehow overshadow the damage that had been done. So I came up with an idea to buy a left handed mug for $2,000. Let me explain . . .

I regularly listen to a popular podcast called Armchair Expert. It’s hosted by Dax Shepard and Monica Padman and features celebrities like Kristen Bell (Dax’s wife), Ashton Kutcher, Ellen DeGeneres, and many more. At some point, as a joke, they started selling these left handed mugs on their online store for $2,000. The inflated price was meant to be a joke because I guess left handed coffee mugs are rare and the ones they were selling were said to have been used by one of the celebrity guests.

So I was listening to the podcast one day and a woman bought a $2,000 left handed mug from the Armchair expert merch store. Dax and Monica decided to donate the money to a charity of the woman’s choice. They called her up and had a nice chat, and she told them about a homeless shelter that could use the money. All of this was prefaced by Dax saying that maybe he’ll “make a thing” out of it and donate the money to other charities whenever someone buys a mug.

Naturally my mind went into advocacy mode. This could be a great opportunity to raise money and awareness for MECFS. There were two problems though: I didn’t have $2,000 to buy a left handed mug and I couldn’t speak loud enough on the phone to tell Dax about MECFS. But I’m a problem solver so I started asking people to give me $2,000 (What? I didn’t say I was a realistic problem solver). Nobody had that kind of cash lying around, or at least not to buy a coffee mug (understandable … I guess).

So Shannon and I started a crowdfunding campaign to raise money for the left handed mug. After a couple weeks we had around $600 (Thanks to some generous folks). But that was still $1,400 less than the mug cost. Luckily, I found a private donor, who will remain anonymous, and we ended up with enough money to buy the mug.

So I bought it and a few days later it arrived. I was a little disappointed (but also relieved) that the mug hadn’t been used by any celebrities. I waited for instructions on the next step of the process, but didn’t receive an email about the donation, and there was no note or instructions included with the mug. So I decided to wait and see what happened. I chalked it up to the Armchair Expert merch team being busier than me, which is generally the case with most people I interact with.

A month later I sent a follow-up email and got a response: Monica would reach out soon. Then a week or so later I got an email from her. She was wonderful. We scheduled a time for the call.

But this was when things got really difficult. Most days I can’t speak at all, and on good days I’m lucky to get a few quiet, mumbled sentences out of my mouth, so I asked a friend to speak for me on the podcast. She agreed and we started outlining our talking points. We also consulted with The Open Medicine Foundation, because that was the charity I wanted the donation to go to. They filled us in on some of their latest news, mainly that all donations before November 27th would be tripled (Hint: There’s still time to donate). As stressful as it was, the timing was perfect — the $2,000 would now become $6,000.

After me and my friend wrote out the talking points, we were all set for the phone call. The plan was for me to talk as much as I could, and then send her a text when I needed to rest and she would take over.

I was told the call would happen between 11:30 AM and 12:30 PM. I assumed the hour-long window was because the podcast team didn’t know when they would finish up with the main guest. So I was fine waiting.

The night before the call I fell asleep at around 11 PM and woke up at 1 AM. But I couldn’t go back to sleep, so I was awake at 8 AM when I got a text saying now the call would happen between 9:30 AM and 11:30 AM. They also said that the call would be recorded for the podcast, which I had assumed, but this meant that I would need to be ready to go with my friend on the other line of a conference call when Dax and Monica called me.

9:30 came around and I called my friend. We planned to stay on the phone together until Dax called. But when he did I couldn’t merge the call with my friend on the other line. I felt terrible that my friend had put in so much work, and stayed on the phone with me for two hours only to have nothing happen. But the fact remained that I was in over my head — I had just said hi to Dax and he was recording the call so I couldn’t stop to figure out the technical difficulties with my friend on the other line. I was all on my own.

How the hell would I say everything I wanted people to know about MECFS, and Lyme disease, and OMF, without talking too much? Well, I’ll let you hear for yourself — you can find the conversation around the 1:55:20 mark of episode 58 of Armchair Expert featuring Sam Harris (you can also download it free on iTunes or any podcast app). You might have to skip through the Armchair Expert sponsors first, but I hope you’ll give the episode a listen.

Side note: I know Sam Harris is sort of controversial, but I actually think it’s an interesting coincidence that we were on the same episode because his mom had CFS and was the creator of The Golden Girls, which had that famous episode covering the disease.

I crashed pretty hard after the phone call with Dax. The call happened on a Friday and I spent most of the next week recovering, staring at the left handed mug beside my bed. I knew it was worth it, but as I’ve learned the last several years, even the most worthwhile accomplishment can be tainted by illness. It was a bit demoralizing to inflict such a price on my body for a tiny bit of normalcy — a few minutes of conversation. But there is something truly magical about making a plan, carrying it out, and the outcome proving to be very close to how you envisioned it.

To me, that was worth the physical repercussions. I realize seeing a plan come to fruition seldom happens as expected, but this time it did. And for all the hurdles that were in my way, I’m really proud this plan turned out the way it did — I’m proud of all the people who contributed money to make it happen; I’m proud of my friends for giving me emotional and logistical support, and I’m proud of myself for not being afraid to make a wild idea reality. But most of all, I’m grateful that my body recovered from the physical consequences. It was rough on my body, but when I got the email from OMF saying Armchair Expert donated $2,000, and later when I heard my usually-nonexistent voice on one of my favorite podcasts, there was no question in my mind that it was all worth it.

4. I am fundraising to pay my medical bills so if you’d like to help out by buying a shirt or hoodie I would LOVE to see you rocking a Show ME the Money shirts.