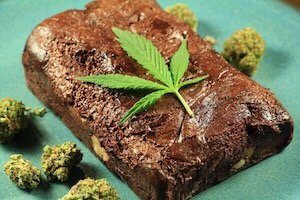 It’s been a long week, and the last thing on my mind is eating a bad brownie. But, whether I like it or not, that is what fate has planned for me this evening.

This week has felt like sprinting through a gauntlet, going from one place to another — work, school, home, errands, more work, more school, etcetera. Somewhere in there I had to eat and sleep. Oh, and maybe relax. Yes, how about I relax and have a little fun?

Well, I’m afraid my interpretation of fun has dwindled quite a bit since I turned 21. Which concerns me because, well, it’s only been about a year since I started drinking and partying legally. In the weeks following my 21st birthday I pretty much partied myself out. These days I’m too tired to party like I did in high school, but I’m too young to sit at home alone reading every night. Tonight I want to find a middle-ground, I want to get a little high with my buddy, Dave.

I want to have some fun and let my inhibitions dissolve, but I also want to try something I don’t normally do. And I don’t mean I want to put on a squirrel costume and go climb some trees. Although you never know what might happen. Instead I want to, I don’t know, try a weed brownie. Yes, that actually sounds like a great idea, right? Then I won’t have to damage my lungs by inhaling marijuana smoke, and I’ll get to taste a brownie, which is never bad. Despite my constant dieting and exercising, I have always loved to eat a good brownie, which for obvious reasons is much better than a bad brownie.

Besides, I really enjoyed the last time I had an edible. And I mean REALLY enjoyed it. I believe it was my sophomore year of high school. My friend was eating a brownie at lunch and I asked for a piece. I should have known it was a weed brownie. I had, after all, been to my friend’s house and seen his huge marijuana plants. But for some reason I thought his was merely an ordinary chocolate brownie. It, however, was not an ordinary brownie, and I didn’t figure it out until I was well into my next class — math.

Let me tell you, parabolic arches and quadratic equations have never been so fun. Wow! Those things really arched, and all the funky symbols blazed through my mind. I remember being so fixated by the integrals and scalene triangles. Okay, I may not have actually known what a scalene triangle was, but I was still fixated on them.

Break Out The Bad Brownies

All I really want to do is relive that glorious time in math class. The thought of a hood edible is so appealing to me, I might even dress up in a weed brownie costume for Halloween. But that’s clearly getting ahead of myself.

For now, the plan is to drive over to my friend Dave’s apartment, then we will eat some weed brownies, yes, lots of weed brownies. Little do I know that they will be bad brownies.

I drive to Dave’s apartment and find a baking sheet covered in small brownies about the size of a Fig Newton.
“Those are tiny,” I say walking into Dave’s kitchen.

“Eh. Start with one. See how it goes.”
I scarf down a brownie, which tastes amazing, but it feels anticlimactic. I want more and not just because I want to make sure I get high, but because they are delicious. I want to eat the whole damn tray of them.

While we wait for the brownies to kick in, Dave and I go grab a pizza. We then return to his apartment to watch a documentary on steroids. It’s now been a couple hours and I still don’t feel high.

“Hey I don’t feel anything yet, do you?”

“Should I have another?”

I’m in the kitchen. The sheet of brownies is still there with each perfectly portioned brownie just begging to be eaten. “Eat me. Eat me,” they say. I want to devour them all, or maybe I don’t.

“Yo. Bro. Um. What’s going on?” I ask Dave with his attention fixed on the TV.

“No, bro. We ate them hours ago. This is something else. I think I’m having a heart attack or something.”

“Wait. How did I get here?” I ask with panic oozing from my facial expression.

“Huh? What do you mean? You drove.”
“No, man. Did I walk to the kitchen, or did I just appear here? I think I just appeared here. I was just sitting on the couch. I don’t remember getting up.”

“I did? When? Just now? Wait. How long have we been watching TV? What are we watching?”

“I don’t know. Awhile. The documentary.”

“The one about steroids.”

“No, man, I think you’re just having a bad reaction to the brownie.”

“I need to go to the hospital. I’m dying. Definitely dying. I don’t remember how I got from the couch to the kitchen. I’m dying.”

“You got up and walked. It’s gonna be okay. Just lay down for a bit.”

“We gotta go to the hospital, bro.”

I shout “I’m dying” a few more times before we finally rush out the door, well, I rush out the door and Dave trails behind looking half shocked that a tiny weed brownie could have such an intense effect on a grown man, and half annoyed that he has to entertain that man’s hypochondria.

After getting in his car we drive out of the apartment complex as I roll down the window, afraid of suffocating from stale air.

“Uh. Do you know where the hospital is?” Dave asks in a moment of unexpected confusion.

“Ahh. Me either. Fuck. Fuckkkkk. I’m dying,” I scream out the window.

“Shit. What should we do?” Dave asks, his voice now gaining octaves.

“Should we go back then my place?”

I take Dave on a wayward mission to where I think the hospital is, which, when we arrive, turns out to be a doctor’s office — now closed because it’s the middle of the night.

“Okay man, yeah, just call the ambulance,” I request, my arms flailing around the car.

“Fine, but I gotta pull over.”

We pull over to the shoulder and Dave makes the call. A few minutes pass. I get out of the car and slap my arms from side-to-side and shake them around dangling in the air.

The next thing I know I’m sitting on the ground surrounded by three paramedics. All of whom are laughing at me. Somewhere in my mind I know how ridiculous I’m acting. Still, I can’t help but feel like they too are overreacting. Here they are, a half dozen municipal workers with an ambulance and a fire truck blocking traffic, all tending to a stoned college student who is now prostrating on the pavement.

After being laughed at for several minutes, and the paramedics vehemently urging me to go home and sleep it off, I insist that I be immediately taken to the ER. The paramedics then suggest, to save me money, that Dave drive me there so I don’t have to pay for the ambulance ride. But I quickly reject that idea, thinking of how we might get lost with their directions. Next the group goes so far as to offer to caravan to the hospital. But no way, I need them to lay me on the gurney, strap me in, and drive to the hospital while Dave, who is also high albeit a thousand times less than me and after eating the exact same amount, follows behind in his car.

The paramedics drop me off in the hospital parking lot and tell me to walk in on my own. So I do. Then I sit in a chair by the emergency entrance, twitching and rocking back and forth. A few minutes pass. I’m still tweaking, still paranoid; a man who appears to be homeless walks through the entrance. He sits across from me, looks around, then a nurse approaches him and politely asks him to leave. He leaves. Another few minutes pass with me still rocking in my chair, then the man returns and another nurse asks him to leave. This happens several more times before one of the nurses attends to me. When he does I’m still paranoid and feeling like death. He ushers me ten feet to a hospital bed. I wait there and a doctor finally comes to examine me, and by “examine,” I mean listen to my pitiful harangue of paranoid hypochondria and exaggerated fear while trying his hardest not to fall on the floor laughing. Before stepping away to check on more urgent needs, like oh, I don’t know, someone with a bruised knee, I plead for reassurance.

“Promise? Do you promise I’m not gonna die?”

He quietly laughs. “You’re not gonna die,” the doctor says, finally giving in to his urge for unbridled laughter.

That Was Definitely a Bad Brownie

I sign away my first born child to cover the hospital bill, officially making tonight’s experimental snack the most expensive brownie I’ve ever had and the only bad brownie I will ever have for the rest of my life. I make my way to the parking lot and face Dave in a stew of shame. I feel a need to compensate him after he spent all night in the waiting room, so to make my embarrassment worse I give him the few dollars in change I have from buying pizza earlier in the night. It’s not even enough to cover the cost of gas he used to drive to the hospital. He begrudgingly accepts the money and we finally arrive back at his apartment. I then collapse on the couch and try not to think about the week-long hangover I have ahead of me. Dave goes to turn out the kitchen light, but pauses and gives me a menacing stare.

I laugh, think to myself “Never again,” and finally fall asleep.