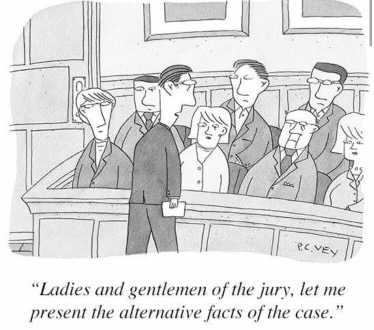 *I know I said I would keep politics off ofthis blog, but I think this is the best place to post this piece, which I wrote a few weeks ago because Trump was being compared to characters in 1984. But personally, I think he’s more like characters penned by Ray Bradbury.

It has become apparent to me, and hopefully many other people, that Donald Trump is attempting to create widespread fear, and in turn, he hopes that the populous will tremble for his protection like a small dog scared of lightening. Unfortunately for him the populous is not a small dog and there is no lightening.

Whether he admits it or not, Truml is attempting to transition out country away from democracy. His administration is hyperbolically hyping terrorist attacks, and he actively defends the authoritarian leader of Russia. He is, without going into every move made by the administration, grasping for power in any way he can. And we can’t allow that.

Donald Trump is “not much of a book reader,” according to The New York Times’ Peter Baker, Trump is instead “a creature of television.” Although Trump is not an avid reader, it is fair to say that his authoritarian leadership mimics many works of literature. Specifically, there are noticeable, even remarkable, parallels between the world Trump is creating and the dystopian societies in stories penned by Ray Bradbury.

Bradbury is perhaps most famous for his bleak, futuristic sci-fi novel, Fahrenheit 451. The book was first published in 1953 when Donald Trump was seven, an age far below the book’s reading level. And while it would become popular well beyond Trump’s formative years, it is all together possible, perhaps even probable, that he has not read the novel. Book burning, the predominant form of totalitarian censorship seen in Fahrenheit 451, is starkly similar to the clamp the Trump administration has attempted to put on mass media.

Kellyanne Conway, a top advisor to Trump, recently used the term “alternative facts,” a phrase that was obviously used in an attempt to rationalize untruths told by the Trump administration, notably White House press secretary, Sean Spicer. Following Conway’s appearance on Meet the Press, many people linked her comments with themes from George Orwell’s dystopian novel, 1984. So much in fact, the book has once again risen up best-seller lists.

By explaining falsities as “alternative facts,” it is apparent the administration wants citizens to believe anything the government tells them, regardless of how inaccurate. And furthermore, the administration doesn’t want to be questioned about its false statements. Trump’s chief strategist, Stephen Bannon, recently extended the administration’s authoritarian stance by saying the media should “keep its mouth shut,” a statement that, along with the president’s unsubstantiated claims about fake news, ring of unbridled Macarthyism.

With Trump, journalists and literary types are repeat targets of his insecurities and lack of impulse-control. Before ascending to the White House he had a long-standing feud with many in literary and journalism circles.

Trump and Tony Schwartz, the ghost writer of his autobiography, The Art of The Deal, bashed each other on Twitter in the months leading up to the election. Never one to censor his own insults, Trump has called Schwartz a “dummy writer” and a “basket case.” But Trump has also feuded with Mark Singer, who wrote an unflattering article about him in a 1997 issue of The New Yorker.

In the piece, Singer quoted Trump as saying, “I think the thing I’m worst at is managing the press,” a controlling sentiment that echoes the current administration’s demagogic tendencies involving the press. Trump went on to tell Singer that “The press portrays me as a wild flamethrower. In actuality, I think I’m much different from that. I think I’m totally inaccurately portrayed.” Following the publication of Singer’s article, Trump called the writer “a loser” and said he “got the sense he wasn’t much of anything.”
Trump’s mccarthyite statements are all too reminiscent of verbiage from Fahrenheit 451. In a poignant scene in the book, the protagonist, Guy Montag listens as his boss, Captain Beatty, explains the normalization of a totalitarian government and an oblivious populace. “If you don’t want a man unhappy politically, don’t give him two sides to a question to worry him; give him one. Better yet, give him none. Let him forget there is such a thing as war. If the Government is inefficient, top-heavy, and tax-mad, better it be all those than that people worry over it.”

The difference is, in our society, the entire populace is not ignorant. One could argue that some, or even most, of the population who voted for Trump is oblivious to the dangers of his authoritarianism, but for the most part our populace is full of intelligent, rational people, who themselves offer a stark contrast to the president. This, as history has shown, is not how the country is supposed to be run.

The dystopian parallels between Bradbury’s works and Trump do not, however, end with Fahrenheit 451.

The Pedestrian, one of Bradbury’s many short stories, depicts a dystopian society where people are arrested for merely walking the streets. The story begins with a lone man walking the streets of an eerie city, whose three million residents all appear to be indoors. That is, except one male pedestrian — Leonard Mead, who is minding his own business. He has a home and a job, but is merely out for a walk. Then, for no reason except that he is alone on the street at night, a police car stops him. A voice shouts from the car as a bright light blares in his face. Mead is then ordered into the back of the police car and hauled away, having done nothing wrong.

Both The Pedestrian and Fahrenheit 451 were written in response to an incident in which Bradbury was stopped walking on the street by a policeman for no apparent reason other than he was walking.

Because of the modernity of The Pedestrian’s symbolism and it’s topicality, one can make several comparisons to our current political landscape. Perhaps most apparent is the parallel between Leonard Mead’s unjust arrest and that of numerous protestors, even journalists, across the country during the mass protests on January 21st. Six journalists were arrested and charged with felony rioting, an absurd charge and obvious slight to the First Amendment. If convicted the journalists could serve 10 years in prison and have to pay a $25,000 fine.

Following the protests, five states have attempted to make it illegal for pedestrian protestors to block traffic. In fact, North Dakota, where for months thousands of protesters have demonstrated against the Dakota Access Pipeline, legislators are attempting to make it legal for motorists to “unintentionally” hit and even kill this type of protester with a vehicle.

Another parallel that can be made from The Pedestrian, is Trump’s overzealous and impulsive use of authority and law enforcement. Following a segment on Fox News by Bill O’Rielly highlighting the ballooning crime in Chicago, Trump tweeted that he would “send in the Feds!” if the city’s crime did not improve. This type of reactionary move would be nearly unprecedented, especially in the infancy of an administration.

At 70 years old, and despite the power of the presidency, it is apparent that Trump will never wield the influence that comes with being well-read and astutely intellectual. He can say he’s read all the literature in the world, but in reality he has not. And perhaps because of this he is undertaking a modern form of book burning, and the irony of his actions paralleling Bradbury’s works in this way is that he is almost certainly oblivious to how he is taking after them.

*Please subscribe to my blog. You will get occasional updates about my posts, but otherwise I promise you’ll never hear from me and your email address will be private.

One thought on “The Irony of Donald Trump and Ray Bradbury”