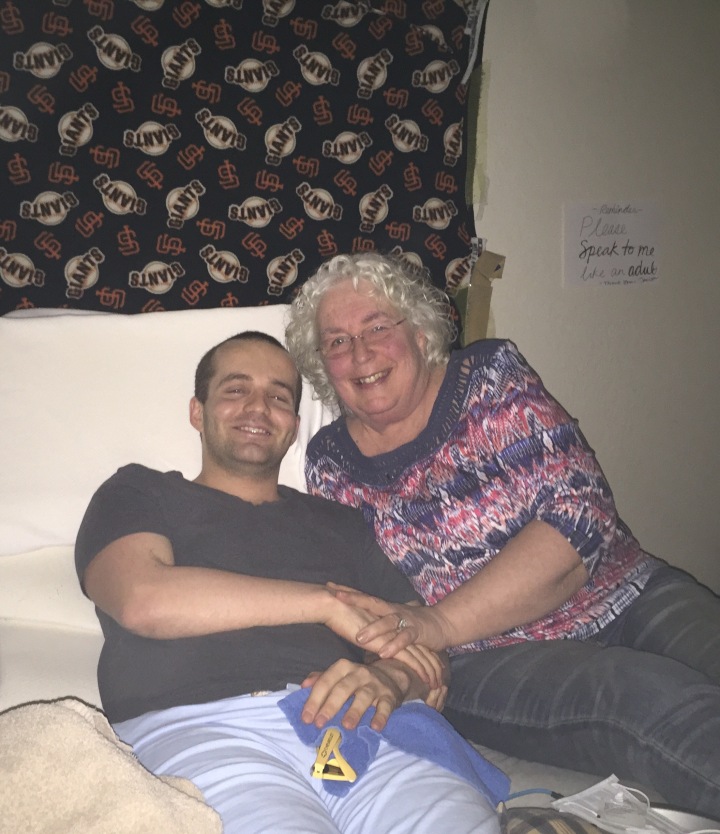 A few weeks ago I got a call from the lovely Janet Dafoe. She was calling because fellow MECFS sufferer Ben Howell was visiting from the UK. Coincidentally, he was also a bodybuilder before getting sick and we’re almost the same age.

Janet and Ben called twice more while he was here (he has now returned to the UK). I invited them to visit me, as Janet had done a few months ago, but it’s unimaginably difficult for her to go anywhere since she cares for her son, Whitney, full-time. Not to mention Ben had just endured an arduous 10 hour flight from the UK, so I’m sure the first thing on his mind was not getting in a car and driving three hours to some random town in rural California where he would sit in a dark room with a stranger who happens to share the same disease he suffers from. Needless to say they didn’t visit, but maybe on Ben’s next visit (assuming the government still allows tourists).

Anyway. During our first phone call Janet mentioned that I should write about my experience being aphonic for more than a year. She asked because Whitney has been unable to speak for years, and as his caregiver and devoted mother, she wonders what goes on in his head.

Janet and I occasionally send text messages to each other which is when the subject of what goes through an MECFS sufferers mind when he/she can’t talk first came up. When she asked I hesitated because I hate speaking for other people especially someone unable to communicate on his own, but here is my response:

When I couldn’t communicate my mind was so vivid. I’d travel places, down familiar streets, aerial views of favorite spots. I wrote messages and stories in my head, played out movies. Anything to keep myself sane. It could be completely different for him [Whitney], but maybe it’s something similar. Maybe he’s taking photos in his mind.

In writing this post, and further contemplating Janet’s question, I went back to look at our text conversations. In doing so, I was reminded of how far I’ve come and how incredibly torturous it has been to be stuck without the ability to physically speak my mind. To illustrate my point, here is our first text message exchange:

Jamison! I’m so sad about this damn disease! But Ron is making progress and is very hopeful! Just takes too long. Hang in there! I think about you all the time!!!! You are amazing! You and Whitney have to meet when you’re better!

To the untrained eye my message may seem normal, it is after all how pretty much every tech-savvy person composes a text message these days. But only I know precisely what kind of struggle went into those words. For instance, “Thx” is an abbreviation many people use because they’re in a hurry (or just lazy), but for me, it was a desperate attempt to communicate without making myself sicker. Believe it or not, when you can barely move your hands and have to wear tanning goggles (pink) s screen (which is already dimmed and on grayscale mode), typing out the word “Thanks” can indeed make you sicker. And it did make me so much sicker, many times, until my body recovered enough to freely type entire words again. And as you may have guessed from my message to Janet, the same goes for typing “your” instead of “ur.” Oh, and if you’re wondering how I feel about the psychological torture of making such grammatical sacrifices as a published writer, well, it sucks! I would compare it to a professional chef being forced to flip burgers at a fast food chain restaurant. 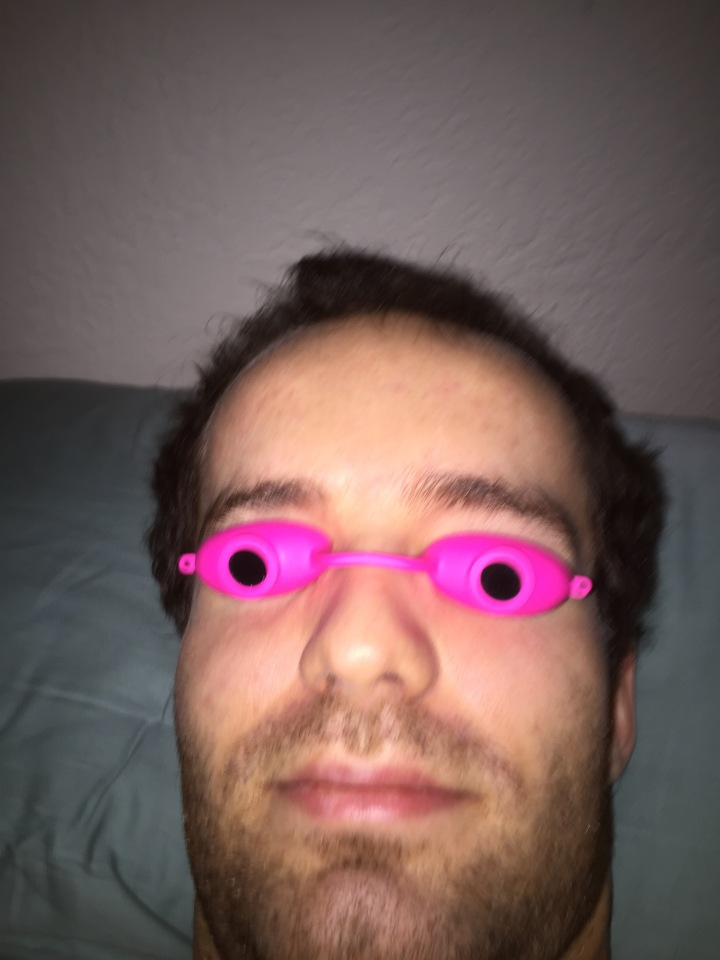 As I reflected on how much I’ve improved and how awful it was when I couldn’t talk, I realized I only remember a general sense of how it was: horrible. It could be because my memory is faulty (as is common for many people with MECFS), or perhaps I would rather not remember, although I’ve never been one to shy away from my traumatic past. Regardless, for the rest of this post, I’m going to attempt to give my lovely friend Janet (and anyone reading this), a glimpse at where the mind goes when the mouth can’t speak.

The truth is, I don’t remember exactly when I lost my ability to talk, most likely because, although I lost my ability to get out of bed in a single moment of terror, I gradually lost my vocalization. If I had to nail it down, though, I’d say I stopped talking a couple weeks after becoming bedridden in early 2015. I remember my aunt, and later some nice neighbor whom I had never met before, staying with me while my mom was at work. In both cases I opened my mouth to speak — I needed water and a protein shake (I had lost my ability to chew solid food at that point) — but pain shot through my jaw. I tried to push through the pain, but all that came out of my mouth was a faint whisper not even I could understand.

What ensued over the following weeks was both further regression of my speaking abilities and a frantic search for methods of nonverbal communication to ensure my needs were met. Luckily my family was pretty intuitive and what they lacked in nonverbal communication they made up for in nurturing. It was obvious that I needed to eat and stay hydrated, but that’s nearly impossible for someone in a state like Whitney’s or mine. It takes an incredible amount of adaptation.

For me, thinking back, it’s a spooky reminder that we walk a fine line between a life that is just bearable and one that is not at all.

So as I remained in bed, unable to speak or eat or move much, I quickly realized I needed to get proactive. But how the hell could I be proactive without basic abilities of self-care? Well, I had to let most stuff go, other people had to take care of me. My job, however, was to keep my mind healthy. It was about all I could do, and it was incredibly difficult. In hindsight I realize that my mind was quite often drifting toward psychosis. I was afraid — paranoid I was going to go insane being stuck in a dark room unable to speak — which in turn only made me more mentally unstable. I was also afraid I was going to die in such a demoralizing state. I kept thinking: “So this is it? I don’t even get to say my last words, I’m too fucking sick for last words.”

But it wasn’t that I was too sick for last words, it was that I was too sick to die the romanticized death we’ve all come to know from movies and literature. Let me tell you, having been so close to death, only the lucky ones are fortunate enough to die in such a glamorous way.

But I didn’t die, obviously. Instead I was left with a manic mind and motionless body. As a distraction people would read to me — my only form of entertainment. But when I was left by myself with nothing but four walls and an ailing body, I had no choice but to entertain my darkest thoughts. I say I had no choice because they really were unavoidable. When I didn’t think I was dying I wished I was, and when I actually felt like living it was because my mind was detached from my body and circumstances.

Laura Hillenbrand, author of Unbroken and fellow MECFS sufferer, has said that writing her extraordinary books has been her way of detaching from the illness. In my bleakest moments I too resorted to story telling, but because I was unable to pen them, I had to memorize what I would (hopefully) write down later when my health improved.

I mentally wrote essays — many of which have now been published. And as my text message to Janet mentioned, I wrote novels, short stories, screenplays, and pretty much every other type of prose. Being aphonic was a daily, and excruciatingly long, meditation in keeping a healthy mind under unbearable circumstances.

Now, after two years (but really six years) of that daily meditation, I wouldn’t consider myself a more peaceful or even saner person, but I’m still here and I’m still fighting and if I had to guess what anyone is doing locked up in a room unable to speak freely I would say, “Well, they’re probably just trying to stay sane.”