The Privilege of Being Sick 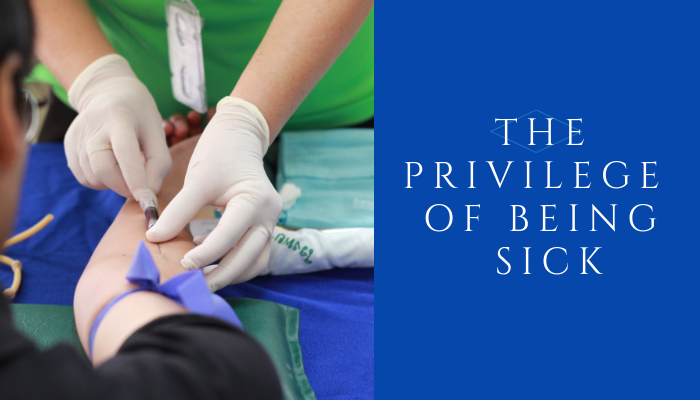 It took being sick for me to realize my white male privilege. I mean truly realize it, not just say things like “I’m grateful for my life because some kids in Nicaragua don’t have clean water like we do.” I feel like that’s the typical millennial hipster thing to say, or the entitled rich person thing to say, and while I don’t fall into either category, I’m sure I’ve said similar things many times, especially before I got sick.

I’m not proud to say that it took getting sick and losing some of my privilege for me to grasp how fortunate I was as a healthy person. But it is one of the few good things that has come from my poor health. This is not to say that now I fully grasp my white male privilege or feel that I am done learning from, and empathizing with, other people. But I am actively working on it.

After I got sick I realized: I’m still more privileged than a lot of people. I still lived in a safe place. I still had food to eat and clean water to drink (okay, maybe I am a millennial hipster). People still took what I said seriously, though sometimes they didn’t take my illness seriously. That is still white male privilege.

As much as it sucks living with a chronic illness, I have to recognize that my life could be worse. Being a woman in my situation, for instance, would be significantly harder. I won’t even pretend to know how much harder it would be, or in what ways. All I know is that I face a level of skepticism from the medical establishment that makes me want to throw those tongue depressor things at every doctor I see. But I now know that women, especially women of color, endure much worse, and I doubt they ever throw tongue depressors.

One example: Companies make a selection of convenient “bathroom” products for men who are bedridden. They don’t do this for women. They don’t make bedside urinals for women with nearly as much functionality as they do for men. This is the kind of privilege that, though not glamorous or prosperous, I have come to recognize while I’ve been sick.

I’ll acknowledge that my poor health is a substantial disadvantage in life. Some people are sick and more privileged than me merely because they are able to walk and talk and travel and pretend to be healthy when they’re not. I’ve been that level of sick, and while it’s better than my current situation in some ways, it’s certainly not without suffering. But the point is not to compare myself to people who are healthier than me, it’s to acknowledge that almost anyone else in my situation would have a harder time. And that’s just not right.

My life is hard. It’s difficult for me to even wrap my mind around it potentially being harder. But it could be. My life would be harder if I wasn’t white. It would be harder if I wasn’t a man. And yet, my life still feels impossible. It feels so impossible that, if it was any harder, I would want to give up. And I think that’s one reason why some people with illnesses like mine do give up.

It’s also why we need to make life easier for sick and disabled people. And not just because it’s the moral thing to do, or because it’s owed to us. We contribute to society. We make art. We invent things. We start businesses. We pay taxes. We do so many things, just like healthy people, but we could do even more with a little help. Our culture and economy would be better for it.

3. I am fundraising to pay my medical bills and if you’d like to help out by buying a shirt or hoodie I’d be equally grateful.

5 thoughts on “The Privilege of Being Sick”