How to Ruin a Mattress . . . And Other Things I’m Good At 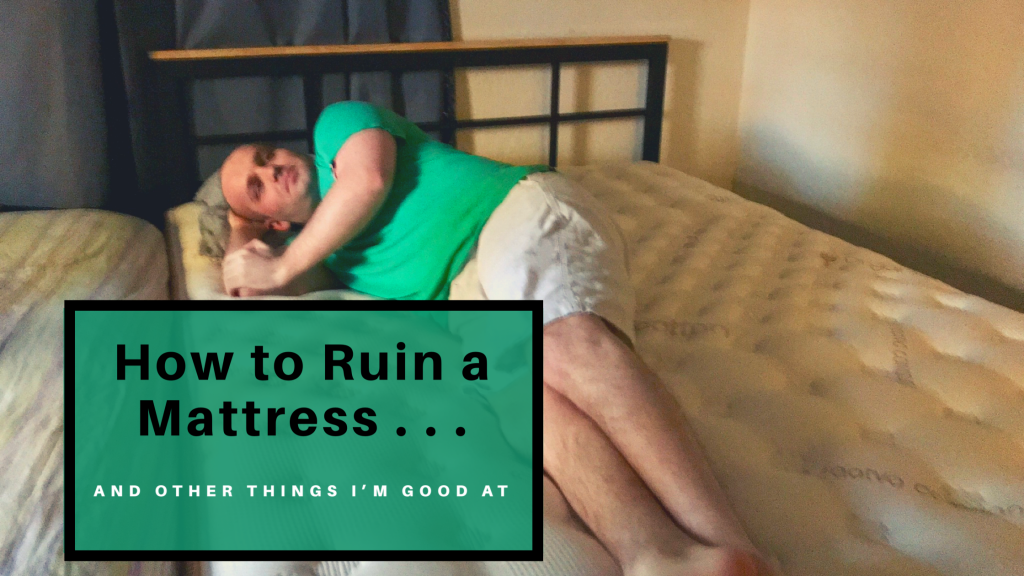 I’ve been on a hunt for the best mattress for a disabled person, like me, ever since I ruined my last several mattresses.

How exactly does one ruin a mattress? The obvious guess might be to have lots and lots and LOTS of sex. And as fun as that would be, I’m not convinced it would actually ruin a mattress. Maybe just make it, I don’t know, more springy? Of course you could just jump up and down on the mattress, perhaps invite your nieces and nephews over to treat it like a trampoline for a few hours. You could even throw a bowling ball or a cinder block on it. Maybe an anvil? Sounds dangerous.

I realize that nobody really wants to ruin their new mattress. That would be crazy. And expensive. But it is something that happens eventually, usually over time, a long time. These fancy beds with their cushiony memory foam and special sleep numbers (whatever they mean) are meant to last years, even decades. But, for me, they don’t. It’s hard to find the best mattress for a disabled person.

Over the last five years I’ve been mostly confined to my bed and have gone through at least half a dozen mattresses. In the process, I’ve learned that the easiest way to ruin a mattress is to just lie on it. Lie on it every hour of every day for, oh, at least two years straight. Then the mattress inevitably wears down, similar to what happens to a house when people put wear and tear on the floors and the foundation. Except a house can be fixed–the floors can be redone, the counters can be remodeled. There’s no remodeling to be done on a mattress though. Once it’s broken, it’s broken. Once it’s full of lumps and sunken spots, there’s no reviving it. Once the middle is caved in and the edges curl around you like a tortilla on taco fillings, there’s no going back.

This is what has happened to every mattress I’ve been on in the last several years. The most recent mattress, the one I’m currently on, was brand new less than two years ago. The manufacturer was nice enough to give it to me and it’s been a good mattress–comfy on top with just the right amount of firmness. Is it the best mattress for a disabled person? I’m not sure (there are lots of good options out there). It works for me, but no mattress can avoid breaking down with a one hundred and eighty pound body constantly sitting on it for more than a year. Though, admittedly, I did think it would hold up a bit longer.

When I first noticed the sunken parts a few months ago, they caught me by surprise, so I turned the mattress. The sunken parts, where I had been spending most of my time, were then at the foot of the bed. But that did little to stop the mattress’ further deterioration. Now I can feel the rest of the mattress slouching under me. I guess that’s just how it goes. New things can’t stay new forever, nothing can withstand the weight it’s under without some sort of deterioration.

1. Thanks for reading! If you haven’t already, please follow my blog and leave me a comment below about how many mattresses you’ve ruined.

2. Some GOOD NEWS: My memoir, WHEN FORCE MEETS FATE, is now available for preorder on Amazon (Canada, Australia, etc.), B&N, and Booktopia. If you’ve already ordered it or plan to, the book will be published January 2021 and all copies will be delivered then. We’re currently working on a new cover for the book (that’s why there’s no thumbnail on the listing yet). I will be unveiling the cover before its published and I’m also working on the audiobook, which I’m excited about. I’ll have some big announcements in the weeks and months leading up to the release of the book. So stayed tuned!