My Book is Officially Published! 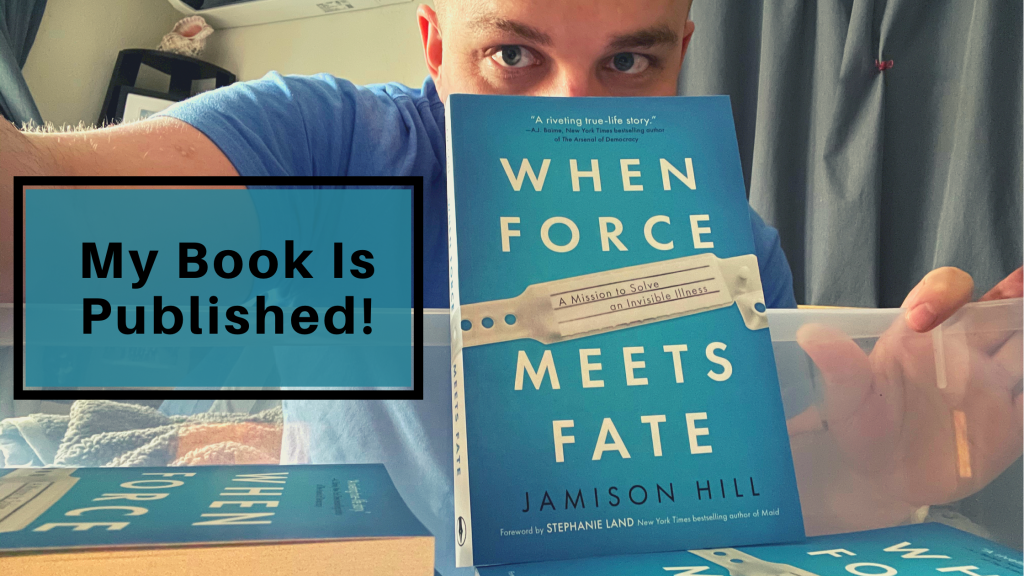 Today is a big day — my memoir, When Force Meets Fate, is officially published. I guess that means I can now call myself a memoir writer.

In addition to more than 70 reviews on Goodreads (4.66 stars), When Force Meets Fate has already received some solid press coverage. The Press Democrat did an excellent piece on the book, and it also received a glowing review in the Providence Journal.

I won’t say that I’ve been dreaming of this moment since I was a kid, because I probably cared more about firefighters back then, but I’ve definitely been imagining this moment for a long time. Over the course of the decade it took me to write When Force Meets Fate, there have been countless times in which I thought the book would never be published.

There was the time my laptop stopped working, and I lost all my drafts, only to miraculously recover one from an email. Then, of course, there was the eighteen month stretch when I was so sick I couldn’t speak, let alone finish writing a chronic illness book.

There have been so many obstacles that could have prevented me from publishing this book and becoming a memoir writer. Memoir writing is exceptionally difficult, especially for a chronically ill, disabled person like me. Maybe one day I’ll do a blog post on how to write a memoir. In the meantime there a lot of good books on the subject.

In the end, I had to finish writing my memoir on my phone, at times wearing tanning goggles because the screen was too bright. That should tell you how important it was for me to share my story. The thought of it has kept me going when I couldn’t speak or eat, when I very much thought death was lurking around the corner.

Little did I know, writing my chronic illness book wouldn’t be the hardest part. Once I finally finished it, I had to find a publisher. It was a long and grueling process, which took up most of my free time from 2016 to 2019 (another story for another day), but I eventually found a publisher, and just as fate made me face the obstacles I wrote about in the book, it has now allowed me to share my story with the world.

Many, if not all, of the wonderful people who preordered the book have now received a copy. It’s a marvelous thing. But suddenly I’m seeing people reacting to something that, for such a long time, has been mine and mine alone. Now it’s out in the world and people are sharing their opinions of it through Goodreads reviews and Bookstagram posts. Some fellow authors who have read the book are even giving their opinions and sharing their advice on how to write a memoir.

These opinions have been overwhelmingly positive, but there have also been a few harsh criticisms. While many people have called my memoir the best book they’ve read in a long time, praising the story for its “honesty and openness,” others have said it’s not for them, calling me self-destructive and “navel-gazey.”

Although I expected this, I didn’t fully grasp how it would feel. I knew there would be both good and bad opinions of the book, but now that I’m actually seeing the opinions, I find myself trying to cope with the fact that two people can have such dramatically opposing opinions of the same book. This realization hasn’t exactly made the negative reviews any easier to read, but I have found peace in knowing that if I had changed the book to appease one set of opinions, it would have created an entirely new set of negative opinions.

1. As I just mentioned, WHEN FORCE MEETS FATE is now available for order. If you’d like to support the book please leave it a review on Amazon and Goodreads. Also, here’s a list of places to order the book (by country):

2. The audiobook is also available on all platforms, including Audible! Here is a sample of the audiobook:

3. You can also support the book by donating to help pay for the audiobook and publicist, expenses that will have to come out of my own pocket.