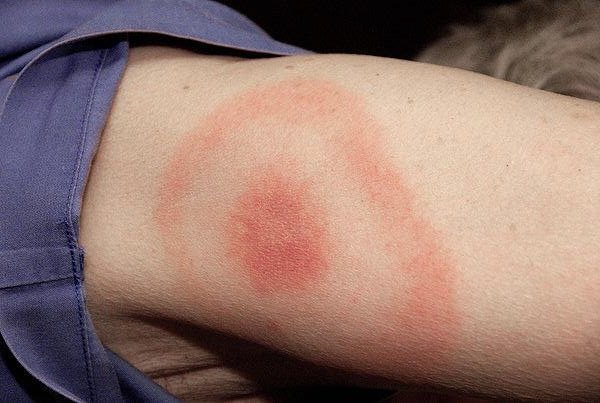 It all starts with a Lyme bullseye rash. Well, not always. In my case, and many others, Lyme disease began more mysteriously.

For me, there was no Lyme bullseye rash or even a detectable tick bite. (The last tick bite I had was ten years before I was diagnosed.) It was almost as if my case of the disease didn’t exist, except the lyme titers told a different story.

If you want to read about my specific case of chronic Lyme disease (and my long term symptoms), I wrote a separate post detailing everything I know (and don’t know) about my case.

For the rest of this post, however, let’s focus on the basics of what Lyme titers are and the beginning of what some call the “Lyme disease 3 stages.”

The three stages are: early localized (the acute phase that can start immediately after infection or be delayed), early disseminated (which happens weeks or months after infection), and late disseminated (when the disease isn’t treated and becomes chronic). The stages can (and often do) overlap and not everyone goes through each stage.

Before we continue, I just want to say that I am (obviously) not a doctor. The information in this posts comes from my own research and what has been explained to me by doctors. Also, this post may have some errors because, again, I’m not a doctor.

What Are Lyme Titers?

When people talk about Lyme titers, they are usually referring to antibody tests (IgG and IgM), which are specific to bacteria like Borrelia, which triggers Lyme disease.

This is one of the most confusing (and frustrating) parts of Lyme disease testing. For a long time, I struggled to understand it (and still do).

When I was diagnosed with Lyme disease, both the IgG and IgM were positive, but I had been bedridden for a year at that point. I hadn’t been outside, let alone near a tick. And yet my test results showed I basically had an acute infection, which had likely occurred in the last several months, if not a few weeks earlier.

I’ll get back to that in a minute, but first, more on the antibody tests.

Antibody tests are the most common Lyme disease tests. The tricky part is it can take several weeks or months following the initial infection for antibodies to show up in a Lyme disease test. And then the antibodies can remain in the body much longer, sometimes years or decades after diagnosis and treatment. This is why it can be very difficult to tell exactly when someone was infected with Borrelia and developed Lyme disease.

Can Lyme Disease be Detected by a Blood Test?

Yes, blood tests are the most common method used to diagnose and detect Lyme disease (though there are some urine and cheek swab tests, the efficacy of which I cannot speak to). The blood tests are typically done by identifying the presence of bacteria, like Borrelia, as well as co-infections. The tests may also be performed on spinal fluid.

How Lyme Disease is Transmitted

There are many variables of course, like the type of tick, whether it latches on, how long it latches on, and how you remove the tick (you might want to keep it and have it tested).

Then, there’s the presence of the Lyme bullseye rash. That’s when you know you’re in trouble. But even if there isn’t a rash, it’s a good idea to see a doctor and get tested.

The ELISA test for Lyme disease is an enzyme-linked immunosorbent assay, which is how the test gets its name. ELISA is a rapid test used to detect antibodies. It is the most sensitive test for Lyme disease, but it can also be inaccurate, giving false-positives, especially when done by itself. The test can also have a lot of false negatives, which prevents further testing, resulting in undiagnosed patients.

That said, if the ELISA test results are positive (and accurate), they can remain positive long after diagnosis, treatment, and even after symptoms have stopped.

As I mentioned, the Lyme western blot test is used to confirm a positive ELISA test result. The test identifies Lyme disease antibodies and is often done to detect a chronic Lyme disease infection.

I tested negative for this approach, only to later test positive for the IGeneX test, which showed a Lyme IgM positive (the IgG was also positive). Additionally, it showed I had a low positive IgM for Babesia, a malaria-like parasite that comes from ticks.

IGeneX: Another Test For Lyme Disease

My case of Lyme disease was diagnosed using an IGeneX test for tick-borne diseases. I believe they offer a urine test, but I did the blood test, which we sent to an IGeneX-approved lab. I don’t remember which lab it was specifically, but we had to send it away. That is after my nurse packed up the IGeneX kit and filled out all the paperwork.

The results were then sent to my doctor. I believe he looked at several different panels, including T cells, antibodies, and antigens. The results were positive for Lyme and found a presence of Babesia. My insurance (Medicare) didn’t cover this test, and when I did it in 2016, it cost around $1,000.

Although I believe the IGeneX test is accurate, for the sake of transparency, I do want to mention that the company’s testing has come into question, notably in a New York Times article from 2005. But the truth is a lot of Lyme disease tests have been questioned by one source or another and even the most common, trusted tests for Lyme disease can have false negatives and false positives.

There’s a lot of controversy surrounding the disease in general—some people don’t believe that chronic Lyme disease is a thing. But if you look at studies that have been done and read stories of patients, it’s clear that chronic lyme disease is real.

Test For Lyme Disease At Home

So far we’ve covered the Lyme bullseye rash, three stages of Lyme disease, and three common Lyme disease tests—ELISA, Western Blot, and IGeneX. There are other tests, like LetsGetChecked, which offer an at home finger prick test. I’ve done one of these tests, and my results came back negative. This is because the test is limited in what it detects. It essentially only looks for the presence of Borrelia IgM, and it doesn’t test for co-infections.

Another Lyme disease test is done by Galaxy Diagnostics, which I tried to do at the same time as the IGeneX test. But the Galaxy test was a three day blood draw and proved too difficult.

We had to draw my blood on three different days, preserving the first two samples while we waited to take the third. This meant buying a centrifuge and freezing the samples. It was a whole thing. We almost pulled it off too, except when the UPS driver came to pick up the three samples, we couldn’t find the shipping label, and he wouldn’t wait for us to find it, so the samples were ruined.

It was a big ordeal. I never did get the Galaxy test done. The three day blood samples were just too much of a challenge to do at home while I was bedridden, and I couldn’t go in to get my blood drawn in a lab.

Since then, Galaxy has come out with a urine Lyme antigen test, which the company claims has “the most sensitive direct detection of Borrelia burgdorferi infection at all stages of the disease.”

It’s also worth noting that some Lyme disease tests are polymerase chain reaction (PCR) tests. These tests can detect Borrelia DNA and co-infections. PCR tests are sometimes used to show active infections, if long term symptoms don’t improve after treatment. PCR tests are not as common as Lyme antibody tests for a number of reasons, mainly because there aren’t many standards in place, and there can be a lot of false positives and false negatives.

What Lyme Disease Test is Most Accurate?

Of all the Lyme titers that we’ve covered so far, it’s hard to say which is the most accurate. In my experience, Lyme disease testing in general is not the most accurate. After all, I have had both negative tests and positive tests. For that reason, it’s a good idea to have as many different tests done as possible. That way you and your doctor can come to an educated conclusion with all of the data in front of you.

How Long Does it Take to get Lyme Test Results?

There’s no universal answer to this question. Depending on the test you do, and how quickly you package it and get it off to the lab, it can take anywhere from a few days to a few weeks to get the results.

You also have to consider the time it takes to get an appointment with your doctor. Your lyme test results may come back in a few days, but you might have to wait several weeks or even months to get an appointment with your doctor, and in many cases you won’t be able to get the test results without getting them from your doctor. The exception to this is some of the at home tests. But even with those tests, I would at least want my doctor to look at them.

How is Lyme Disease Diagnosed

Even through a Lyme bullseye rash is a good indication of an infection, it isn’t enough. Lyme disease is most accurately diagnosed by Lyme doctor using one of the tests mentioned above or a combination of them.

A lot of people also ask: is Lyme disease fatal? It can be. It’s rare that it becomes fatal, but I have heard of people who have died from it. I have talked to their loved ones. It’s absolutely devastating. So it does happen. But more often, Lyme disease robs people of their health and an active life, limiting their abilities.

Does Lyme Disease Ever Go Away?

Lyme disease does go away, for some people. But for many others, it doesn’t, lingering long after the Lyme bullseye rash disappears. If the disease is detected early, and the patient is put on the right treatments at the right time, with some luck, they might kick Lyme disease before it becomes chronic and lyme life becomes their new normal.

1. Thank you for reading about Lyme titers and the Lyme bullseye rash! I can’t say this enough: YOU are the reason I keep writing. I write these posts so I can share my thoughts and experiences with anyone who will read them. So thank you for giving me a platform!  You can also listen to my blog.