Are You Afraid of The October Slide? 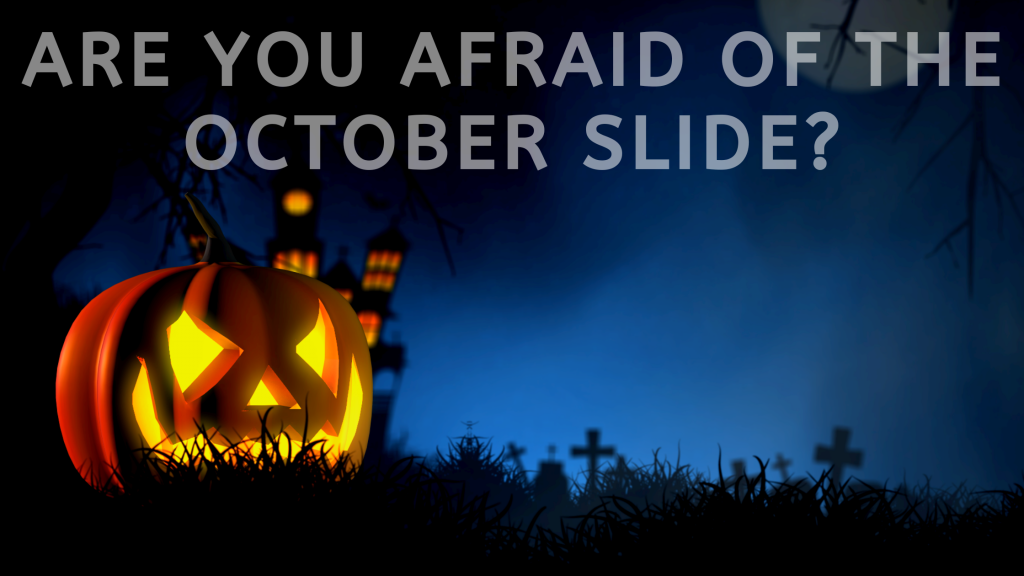 It’s that time of year again—time for carving pumpkins, picking Halloween costumes, and eating lots and lots of candy. But it’s also time for something else, something unique to the chronic illness and disability communities, something far more sinister and frightening than your neighborhood haunted house.

I’m talking about the October Slide, a spooky phenomenon in which people with chronic illnesses (particularly MECFS, Lyme, and POTS) get sicker during the month of October. It’s something I have experienced myself and have written about several times on this blog, and yet I have not found a definitive answer as to why some people with chronic illnesses feel worse during October and the fall months.

There are many theories—some say it’s related to the weather changing, becoming colder with less daylight. Some say it’s due to mold and chemical sensitivities during the colder months. Others say it’s because there are higher rates of colds, flus, and other illnesses, which would suggest that the October Slide is even worse or perhaps more prevalent in the COVID era.

Whatever the true culprit (or culprits) are, I have been fortunate enough to not have much of an October Slide this year (knock on wood), especially compared to previous years. While I’m not feeling my best, I am certainly doing better than I was a few years ago. But that doesn’t mean that I’m not thinking about it, fearing the October Slide and all of its wrath. It’s easy to imagine how such a destructive force could slide right into my future plans, like a creepy Halloween nightmare.

Living with this kind of fear is never fun. It is a miserable existence, but it is also hard to avoid when you’re living with a chronic illness. The potential of feeling worse always seems to be lurking around the corner, like some weirdo dressed in a grim reaper costume greeting trick-or-treaters with handfuls of cough drops instead of candy.

I try my best not to let the fear of the October Slide (or any other slide) rule my life. And, for the most part, I am successful. I don’t spend most of my time thinking about how my health could suddenly disappear, as if it were a Snickers bar being devoured by a sugar-crazed six-year-old (I’ll stop with the Halloween similes now).

Instead of dwelling on what could be, I try to live in the moment as much as I can, enjoying the little things I can do for myself, the things that make me feel human and less sick. When the fear of getting sicker creeps in, I usually feel some sort of impending doom, then I remember that in order to be afraid of feeling worse, I must first be feeling better, and that is what I need to focus on. I need to enjoy feeling better as long as it lasts because, if I do get worse, I’ll wish I had savored my current level of health while I could.

So that’s what I’m going to do—savor this moment. It’s not perfect and not it’s permanent, but it’s definitely good enough to enjoy.

3. Order my memoir, WHEN FORCE MEETS FATE. If you’d like to support the book (and this blog), please order a copy and leave it a review on Amazon. The book is available from:

1 thought on “Are You Afraid of The October Slide?”