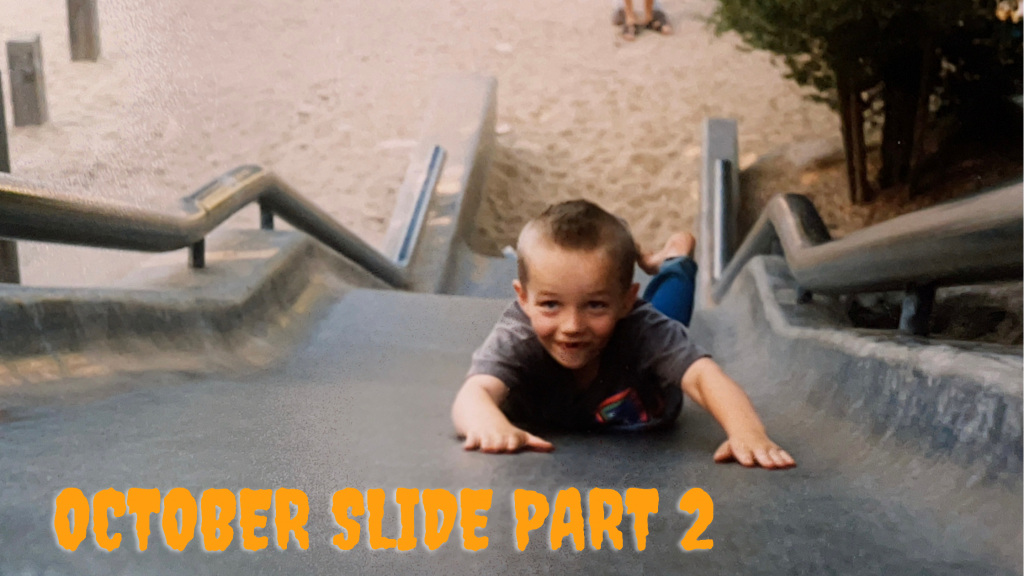 Several years ago I wrote a blog post about the October Slide. At the time I didn’t know much about it and was sort of educating myself as much as I was trying to start a discussion and raise awareness. Not much has changed since then. I still wonder about this weird phenomenon where people with chronic illnesses (especially MECFS, Lyme, and postural orthostatic tachycardia syndrome) get sicker during the month of October.

I know October is almost over, so this post may be a bit late, but generally the October Slide isn’t just limited to a single month. Many people who experience it do so through most of the fall, into winter, and the following year. In fact, some people with MECFS get worse in November and call it the November Factor.

The good news, at least for me, is that I haven’t been feeling that much worse this October. I’m definitely doing better than past Octobers, but I will admit that earlier this month I did notice it becoming harder for me to speak and walk. For the most part this was a small blip and I haven’t taken much of a dive, but it did make me wonder: Is this the October Slide POTS edition? Is it once again coming for me?

It didn’t help that I noticed some of my friends and loved ones with chronic illnesses going through their own version of the October Slide, wondering the same thing. And then there’s the fact that, even though I wrote that blog post four years ago, a surprising number of people still read it. Every October my blog gets an influx of referrals from people searching October Slide.

So, this is all to say that I don’t have any answers. In fact, most of the year—maybe even 11 months of it—I tend to forget all about the October Slide. But then, either because of the page views on my blog or someone mentioning it on social media, it pops back into my mind.

Through such channels I have found others writing about and discussing the October Slide. While it’s good that people are still talking about it, someone (a doctor) should really do a study on it. I know a lot of chronic illness patients would like to see the data and get some answers.

1. My memoir, WHEN FORCE MEETS FATE recently won an IndieReader Discovery Award for best nonfiction. If you’d like to support the book (and this blog), please order a copy and leave it a review on Amazon. The book is available from:

2. The audiobook is also available on all platforms, including Audible!

3. You can also support my blog by donating directly.