The Time My Doctor Broke Up With Me: A Bad Story Gone Good 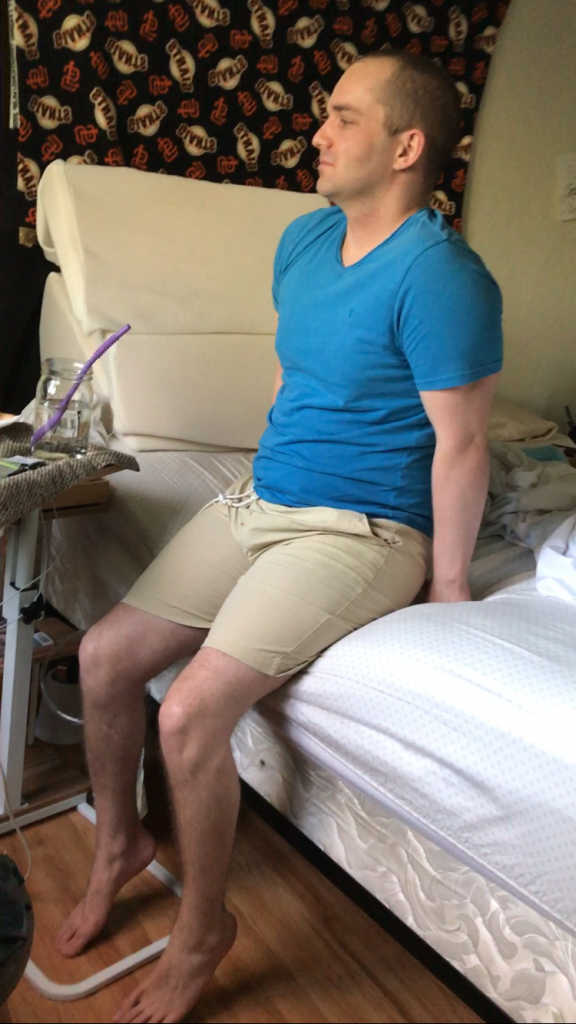 In October 2015, after nearly a year of being bedridden and receiving no medical treatment, I finally got to see a doctor. I shouldn’t say I saw him, because well, not only were my eyes completely covered during the appointment, we weren’t even in the same room. In fact, the appointment consisted of the doctor calling my mom (seated outside my bedroom) from his office in Silicon Valley. The distance between us was about 200 miles, yet he was ethically willing to charge me $500 out-of-pocket for a 30-minute phone call (which I’m pretty sure is illegal since I had MediCal insurance), and I wasn’t even included in the conversation.

But to be honest, despite his exorbitant fee and a bevy of other complaints I now have with him, I’m so incredibly grateful that he was willing to treat me. If he had not done so, my condition may not have improved. I may have stayed in a catatonic state for years. I will always be thankful the doctor came into my life and helped me. So what if our relationship was constantly on the rocks? So what if he was, at times, a condescending a-hole? So what if he eventually broke up with me?

With a pile of previously ordered lab work in front of him, the doctor was initially able to ascertain some of the major issues riddling my body.

In the following months the doctor had me take a slew of medications including Valcyte, a powerful antiviral medication to treat cytomegalovirus, one of two active viruses (that he knew about) in my body. My favorite part about taking Valcyte was having to wear gloves because the medication was toxic to the skin, yet by some wonder of pharmaceutical magic it was safe for me to ingest.

The other virus, which the doctor was unable to treat, was Epstein Barr (EBV). These viruses almost always become latent after an acute infection. However, as is the case with many people who have ME/CFS, the viruses either never became latent after entering my body, or they did for a relatively short amount of time and then became active once again. Either way it sucks.

In addition, because I have a genetic mutation labeled MTHFR, which prevents my body from converting B12 and folic acid into usable forms (methyl), the doctor put me on a methyl-folate supplement to accompany daily methyl-B12 injections. I must say the latter was just about the most fun I’ve ever had — my mom poking me with a needle in the dark, followed by an episode of urinating what could easily be confused as blood because, unbeknownst to me at the time, B12 injections make urine turn red. I’ll have to remember that last part next April Fools’ Day.

But the fun was really just beginning. The doctor also had me take hydrocortisone pills to correct the orthostatic intolerance which prevented me from lifting my head off the pillow or laterally stretching my limbs. The cause was my adrenal glands and hypothalamic pituitary axis in my brain basically had a huge fight and decided to stand on opposite ends of the room, not talking to each other, while I remained stuck between them with a giant python snake slowly squeezing the life out of me. Like I said, lots of fun.

So I was getting poked with needles and taking 15 pills every day, but I was also starting to feel better. For the first time in a year I could use my phone to text and even listen to podcasts. I could be touched without pain. But I was still so unimaginably sick and the doctor kept pushing new treatments in the hope that I would soon be well enough to travel the 200 miles to see him in person. Meanwhile I was thinking: what else could this guy possibly have up his sleeve?

Well, as it turned out, he had a lot of things up his sleeve. The most noteworthy was daily infusions of saline and vitamins through an IV catheter called a PICC, which at the time I knew nothing about, particularly that it involved a minor surgical procedure with a local anesthetic I had a bad reaction to in the past. One day a nurse showed up at my house and quickly began turning my bedroom into a makeshift operating room. Because of my lack of mobility, the nurse was hesitant but still placed the foot long catheter tube in a vein just above my elbow stretching to within a few millimeters of my heart. Now if you haven’t had the pleasure of having an “expander” tool shoved in one of your veins, then a tube slithering inside your arm, through your armpit, and cuddling up next to your heart, well, I’m afraid you just haven’t lived yet.

As you might imagine this was not an easy thing to accomplish for someone stuck in a completely darkened room. There were complications to say the least and I wasn’t well enough to adequately communicate the difficulties I was experiencing. After the procedure was over I struggled to make a noise audible enough to properly display my misery. Meanwhile the nurse felt the need to tell me how he’d like a shot of Jameson because my name is like the whiskey. My name is not like the whiskey.

I was in excruciating pain, but everyone, most vehemently the doctor, was telling me to leave the PICC in and that because the nurse who placed the tube had left there was no body capable of taking it out anyway. It was a dangerous situation riddled with ignorance and incompetence by the medical professionals whom I gave my trust.

By this time it was May 2016 and the doctor and I were really hitting the skids. Although I was still improving — my voice was becoming more audible and I could elevate my head without becoming sicker — the pain from the PICC was still immense. I don’t know if the tube had been placed in a way that caused the vein to impinge on a nerve or if the pain was merely caused by increased sensitivity from my condition. Nevertheless I was taking Advil every few hours just to keep myself from pulling the tube out and the doctor remained skeptical of my symptoms. He even made a personal plea for me to keep it in because he spent so much time arranging the logistics. So even though he was getting paid for his time and he was not in any pain, I left it in for three weeks.

But I was still very angry. Angry at the doctor for not telling me what the hell a PICC was ahead of time, or why a foot long tube placed so close to my heart was even necessary when I could have had a much smaller IV in my forearm. But most of all, I was angry at him for belittling my grievances and being skeptical of my pain and other symptoms. For hours I would labor through hand signals to tell my mom exactly what symptoms I was having and how severe they were. She would then tell the doctor who would reply with a terse four- or five-word answer like “I doubt it’s that,” or “I don’t think that’s true.”

I was the angry one, not the doctor. I was the one with years of suffering and months of being near death, but still it was because of him that I was improving and for that i had to be grateful.

After all it was the saline infusions that were helping and once he finally listened to me and ordered the PICC taken out and replaced with a regular IV I really began to improve. By July I was speaking polysyllabic words, usually four-lettered ones, and soon I would start eating solid food again.

It was about this time that the doctor broke up with me. Like most acrimonious breakups this one was because a combination of things. His staff was rude, incompetent, and even more skeptical than the doctor. They treated my use of saline infusions as if I had a dependency issue. As much as I love being stuck with a needle in a dark room and having a liter of salt water pumped through my veins every day, I really don’t think I was addicted to it. And even if I was, that doesn’t negate its benefits.

In the end I’m sure the doctor didn’t appreciate that I used my newfound fondness of four-letter words, which I ultimately directed at him, just as I didn’t appreciate him second guessing everything I was telling him. Prior to formally cutting ties with me, the doctor made sure to repeatedly let me know that the saline infusions which he first introduced were “only temporary.” And all I could think was: isn’t everything temporary?

41 thoughts on “The Time My Doctor Broke Up With Me: A Bad Story Gone Good ”