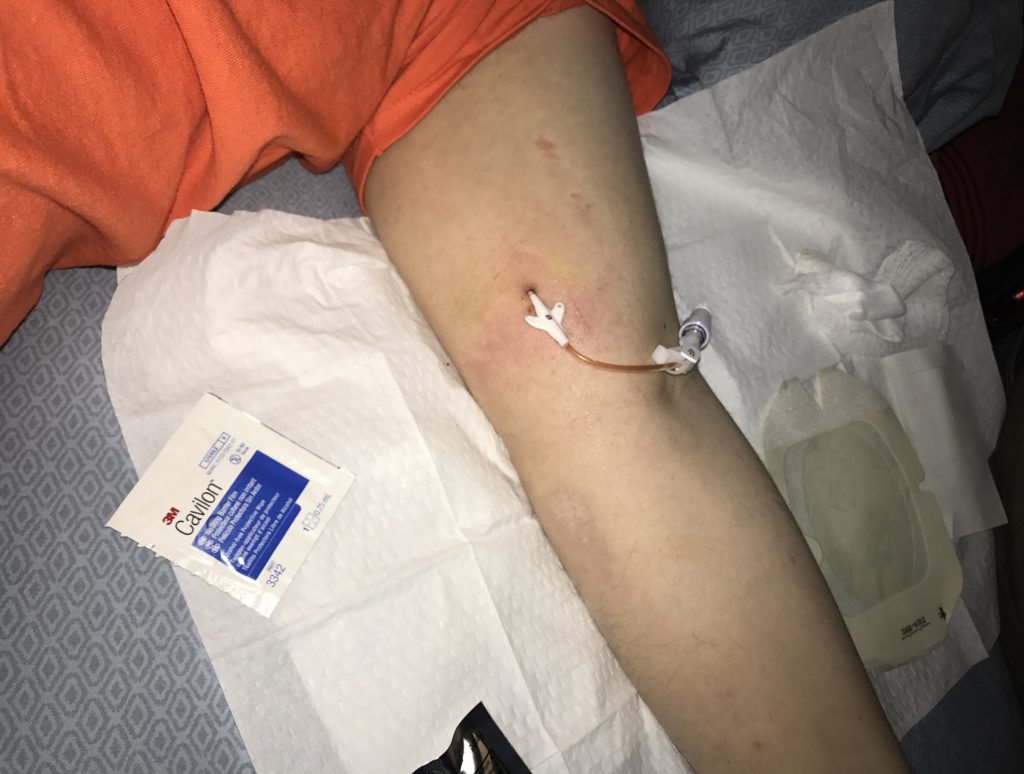 The following is a post featuring my opinions and research I’ve done. I’m not a medical professional. So I’m not going to try to make any sort of definitive link between MECFS, lyme disease and diabetes insipidus. I’m merely going to share my thoughts and experiences.

I recently came across an AP news report on IV “bars,” and how seemingly healthy people use them for a number of reasons. They interviewed one woman who goes in for an IV every time her Lyme disease symptoms flare up. She said it helps her to function while her symptoms are worse. Another person, a man I guessed to be in his late-twenties, said getting IV hydration cures his hangover — within 30 minutes it’s like he never went out partying the night before.

This story immediately resonated with me because I go out partying pretty much every night and can never kick my hangover the next day. Just joking. But seriously, it resonated with me for a couple reasons: (1.) because MECFS often makes me feel hungover, or much worse, if I don’t get IV hydration everyday, or at least twice a week, and the feeling is usually worse if I overexert myself. But also, the story resonated with me because (2.) I’ve been getting IV saline (and sometimes vitamins) for a year now and, within that time, I’ve gone from aphonic, eating through straws, and unable to elevate my body, to now consistently improving with every infusion.

I don’t want to come off as sanctimonious — pushing IV treatments on anyone. Everybody has a different body, and some people have different reactions to treatment, so whether you are healthy or have MECFS, Lyme disease, or another condition, IV hydration may not work for you. Over the last several months I have talked with people who have seen no benefit and people who have seen their health improve with IV therapy. I have rarely talked to people who have had a negative reaction, although I’m sure it happens all the time, especially with a more complex compound than simple saline.

One of the main arguments against IV hydration and nutrients is that infection can occur around the insertion site. I totally understand this concern — IVs are invasive after all, but that’s why a nurse should administer the IV and a doctor should prescribe it.

Oh, and this is probably a good time to mention that, although a needle is used to place the IV, what is actually set inside the vein is a tiny catheter tube which infuses the compound into your bloodstream.

Because I’ve been getting IV infusions for such a long time — and I need them and having a nurse come to the house is expensive — my mom and I have been trained to do them.

Having said that, I would never place my own IVs (or have anybody I don’t trust place them). Otherwise, I’m comfortable doing everything else IV related. Lately, I’ve been using a midline IV, a shorter version of a PICC line, which can be left in my arm for weeks. It certainly is convenient, but also feels kind of like having a twig stuck in your arm for a month. The nice part, however, is that it allows me to hook up to a liter bag of saline anytime I want.

It’s actually fairly simple, and if there wasn’t such risk involved, because it’s invasive, I would say anyone could run their own IV. But the truth is, any number of things can go wrong: from an infection at the IV insertion site to too much air getting in the tubing which runs from the bag of fluid to the IV. But thankfully none of these things have happened to me.

In the AP video there’s an interview with a doctor who seems to be adamant that the benefits of IV hydration are due to the placebo effect. Now, I realize what he said may have been taken out of context and he may have been referring to healthy people who can typically get adequate hydration by simply drinking water, but even so, I feel like an IV with saline and vitamins is more effective at treating hangovers or colds or whatever than just drinking water. I’ve had numerous people suggest I do the latter to save money, or just because the thought of an IV having such a profound salutary effect on my health seems impossible. In fact, my ex-doctor (yeah, he broke up with me) and his staff felt this way and seemed to suggest I might be dependent on the saline, and furthermore, that the effects were either temporary or all in my head. Now, I’m may not be a doctor, but I’m sorry, that’s complete bullshit. And let me tell you why….

First off, I was extremely reluctant to try IV hydration in the first place and my ex-doctor actually had to sell me on it. And once I got the IV it was excruciatingly painful. Still, I kept trying the infusions and after a couple weeks I started to improve. Now, a year later, I’m still kicking ass on the recovery train. Choo-choo!

Also, given my recovery, I think it’s fair to say my body is dependent on saline, and even if I was addicted to the IVs, so what? I’d much rather be addicted to saline than pain killers or anything else for that matter.

I do, however, want to clarify: I believe the placebo effect is real. I think some people experience relief from their symptoms thinking they are taking a beneficial treatment, even when they are not. But I think it’s important to, when talking about the placebo effect, consider the difference between feeling better and feeling cured. It is my opinion that if someone takes a placebo treatment and is cured, well, they must have something else going on, whether it’s hypochondria or attention-seeking. But simply feeling better while taking a placebo, which seems to be the most common occurrence, is more an indication of the tremendous power of the brain.

The aforementioned AP report focuses predominantly on healthy people getting IV hydration. I cannot speak for these people, or even relate much, because I haven’t been healthy in more than half a decade. But for someone like myself, it turns out there is an actual medical explanation for why IV hydration works and oral hydration doesn’t. It’s called diabetes insipidus, and according to UCSF, it is “a rare condition that occurs when the kidneys are unable to conserve water during the process of filtering blood.”

This condition is, of course, different than the diabetes related to blood sugar. Instead, “diabetes insipidus is caused by a lack of anti-diuretic hormone (ADH), also called vasopressin, which prevents dehydration, or the kidney’s inability to respond to ADH.”

This hormone allows the kidneys to keep water in the body. It is made in the hypothalamus area of the brain, and is stored in the pituitary gland.

I only recently came across this information, although my ex-doctor mentioned some of it while I was catatonic, so it didn’t really register in my mind. It’s nice to finally have a name (diabetes insipidus) to go with the condition, which I too was skeptical about at first. My nurse kept telling me that my urine looked incredibly diluted, which I thought was a good thing (as is the case for healthy people), but we both eventually concluded that it’s in fact a bad thing when you have DI because the body does not retain water, and instead quite literally (excuse me) pisses it away.

What I find so fascinating about DI is that the exact opposite applies to healthy people. But when I think about it, it’s only fitting that someone with a disease (MECFS) that goes against so many medical and health care norms also has such a paradoxical secondary condition.

1. Thank you for reading about diabetes insipidus.

I can’t say this enough: YOU are the reason I keep writing. I write these posts so I can share my thoughts and experiences with anyone who will read them. So thank you for giving me a platform!  You can also listen to my blog.

21 thoughts on “Diabetes Insipidus: A Different Kind of Diabetes ”