A Veiled Attack on Disability Rights 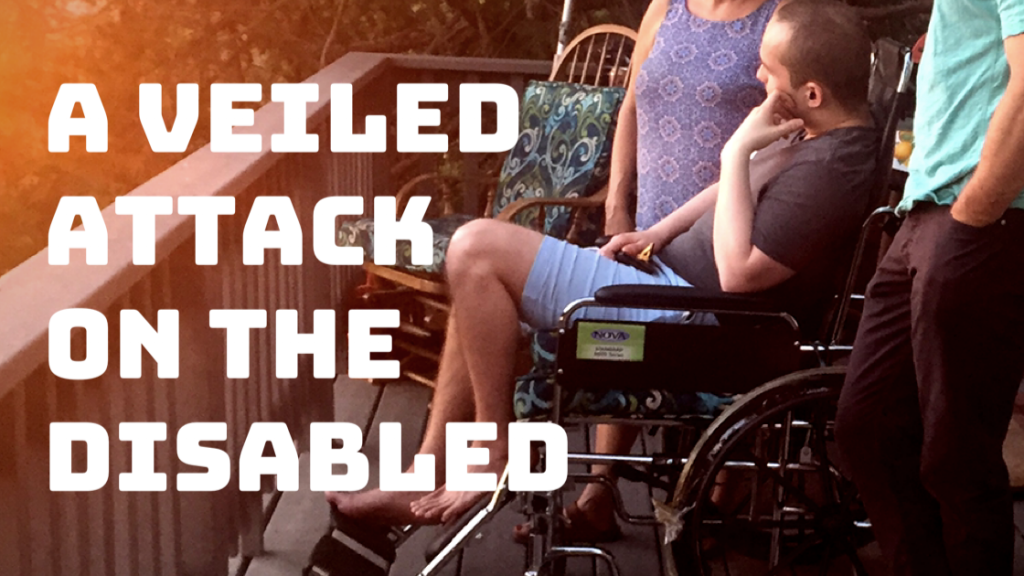 My first job was working the front desk at a gym for minimum wage, long before disability rights were on my mind. I scanned member ID cards, re-racked weights, and cleaned the entire gym — wiping up people’s saliva from the sinks and their sweat off the treadmills, sanitizing the toilets and showers, and picking up the garbage they left behind. It was a thankless job that I did for less than eight dollars an hour. As hard as it was, the job was still easier than the work the Trump administration now wants me to do as a disabled person.

I’ve been disabled and unable to work for more than five years, but now the president is attacking disability rights, taking steps to send disabled people like me, who are physically impaired, back to work. President Trump’s $4.8 trillion budget proposal for the 2021 fiscal year aims at “getting individuals with disabilities back into the labor force” through a slew of vague policies and inadequate programs that will do more harm than good.

As a disabled person who can’t walk and is confined to a bed or wheelchair around the clock, it would be physically impossible for me to do the work I used to, or for that matter, any work other than writing an occasional freelance article. I can’t clean toilets or wash sinks; I can’t wipe people’s sweat off workout equipment. I can’t even wipe my own sweat off workout equipment because I can’t work out.

In 2011, I was diagnosed with myalgic encephalomyelitis (chronic fatigue syndrome), which, if you read this blog, then you know is a devastating multi-system disease. I tried to maintain my work schedule, but the disease left me bedridden for nearly two years. I was too weak to take care of myself, cleaning up after someone else at a gym would have been impossible.

I spent years trying to get disability benefits through SSDI, meaning Social Security Disability Insurance, but because I hadn’t contributed to the workforce long enough, I had to settle for Supplemental Security Income (SSI), which, in many cases, offers benefits that pale when compared to SSDI.

Currently, I receive around $930 a month in the form of a cash disbursement from SSI. It’s barely enough to pay my rent, and not nearly enough to cover the thousands of dollars a month I incur in medical bills. Because my bills vastly outnumber the SSI disbursement, I often find myself needing more income. But there’s no way I could work a conventional job, even a part time work schedule would be unrealistic for me.

Regardless, based on Trump’s latest budget proposal, he wants to send me back to work. It’s not enough that I can barely get by on my paltry SSI disbursements, now the Trump administration wants me to work when I can’t even walk.

The administration also wants to make it harder to qualify for disability benefits by limiting a person’s reasons that they can’t work, including not being able to speak English.

The president’s plan, as reported by CNN, says that disabled Americans participate in the workforce at a rate less than half of that of our able-bodied peers. But that’s because many, if not most, of us can’t work. And it’s not because we don’t want to work or don’t need to work, the administration doesn’t realize that the reason disabled Americans participate in the workforce at such lower rates is because our disabilities prevent us from working. It’s not because we‘re unmotivated and need some sort of half-hearted government incentive or can’t find work on our own.

Even so, Trump’s budget claims that the unemployment rate among Americans with disabilities is the lowest on record, which makes the president’s push to increase the participation rate of working age disabled individuals even more dubious.

But the administration is also going after disabled people who can work, a clear attack on disability rights. The proposed budget introduces substantial changes to Ticket to Work, a social security program that gives disabled people the option to work while keeping their disability Medicare or Medicaid disability benefits. Under the proposal, the program would be transferred to the Department of Labor, all but guaranteeing that it would change drastically. It’s not difficult to imagine disabled people who use Ticket to Work being stripped of their social security benefits when the program is moved out of the jurisdiction of the Social Security Administration. The president wants to make the program “simplified, streamlined, and improved,” terms that disabled people like me have come to know as code for diminishing or taking away our benefits.

We aren’t the only ones impacted by such language. The president’s budget proposal is littered with other euphemisms used to indicate drastic cuts and changes. As Michael Hiltzik recently wrote for the Los Angeles Times, “Cuts in welfare, student loan forgiveness and disability benefits are described as ‘reforms,’ as is a cut in postal service support. ‘Modify’ is the word for cuts in federal employee retirement and health benefits.”

The proposal also eyes cuts in housing, education, and food stamps, all of which impact people with disabilities. According to The New York Times, the proposal includes a policy on establishing a panel of experts to create new programs that would increase the participation of disabled Americans in the workforce, the goal of which is to save some $47 billion over the next decade. The president also wants to save $10 billion by limiting retroactive disability payments when a person becomes eligible for the program. In total, the president would like to save $75 billion on changes to disability programs by 2030.

While such efforts to attack disability rights by reducing disability benefits and getting disabled Americans back to work may seem savvy to some people, in truth, Trump’s budget does not have disabled people’s best interest in mind. Instead, he wants to reduce social security spending, despite his own public statements to the contrary. By all indications, his actions are a thinly veiled attack on Americans with disabilities and an aggressive strategy to get us to do jobs we can’t.

3 thoughts on “A Veiled Attack on Disability Rights”