The Art of (Not) Accepting And Dealing With Unsolicited Advice 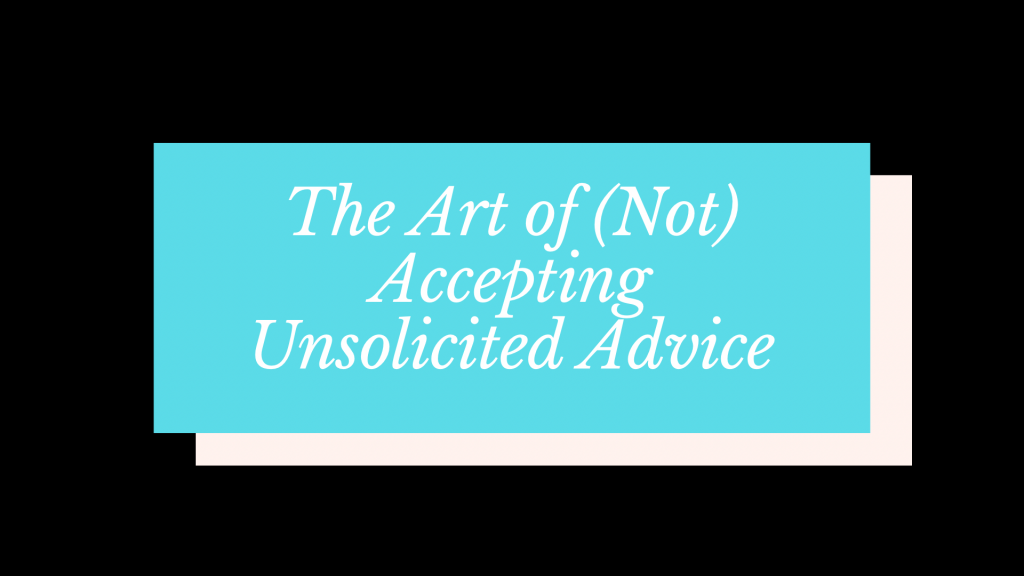 Dealing with unsolicited advice is tough. The last time I checked my Facebook messages, some guy called me a “fucking idiot.”

He sent me a barrage of messages pushing unsolicited medical advice, one of many such people who, for some reason, feel the need to give their unqualified opinions about my health. In the years that I’ve been writing about my life and my illness, I’ve learned that this sort of unsolicited advice comes with the territory. I don’t like it, and I rarely, if ever, accept it. But that doesn’t stop it from happening.

So, instead of letting it upset me, I’m trying a new method of dealing with unsolicited advice. I laugh it off. I don’t take it seriously. My response to the guy who called me an idiot for not taking his “miracle mineral supplements” was to laugh and tell him that he sounded angry. Because he did. He sounded very angry. So I blocked him.

But he was undeterred. He sent me another message from a different account:

Like I said, he was an angry guy (and ignorant. I hate people who use the “R” word). So I blocked his second account, which probably just made him angrier. But he deserved it. And it saved me from getting upset, which is my preferred way of ending a conversation. I’m sorry, but if a random stranger slides into my DMs and tells me that some bullshit supplement, one probably filled with baking flour, is going to cure me, then I absolutely reserve the right to reject him. And if that pisses him off, then he needs to rein in his messianic complex.

For me, it all comes down to the simple truth that if I don’t take unsolicited advice seriously, I won’t get upset that random strangers with no credentials or medical training think they know what’s best for my health.

I do believe their hearts are in the right place though. Well, maybe not the angry guy. But some people genuinely care and want to help, they just don’t know how. It takes an obscene amount of arrogance and ignorance to think they can heal me without any proper medical training.

Dealing with unsolicited advice starts to feel like I’m hanging off a tall building and first responders are trying to save me while a bunch of people block the way and stand over me offering bogus supplements and glasses of celery juice instead of letting the professionals do their jobs.

I’m not the only one who has been annoyed by a whacko who read a book on the healing power of artichokes or a high school dropout who works the bottom of a supplement pyramid scheme. As frustrating as it is for me to receive this unsolicited medical advice, some people get it much worse.

Recently I came across a story of a biology professor at the University of Oregon who died of lymphoma. As the biology professor, Jeff McKnight, neared the end of his life, his story spread online and his wife, Laura, tweeted a plea for people to stop sending her treatment advice. McKnight was being treated by top oncologists, yet ordinary people with no qualifications still felt they knew better, that they had some secret treatment that would save him. And worst of all, he was literally on his deathbed and, instead of giving him and his family the peace and privacy they deserved, people were bombarding them with nonsensical medical advice.

It reminds me of a similar, only slightly less enraging story, which I heard on a podcast. The hosts, Rhett and Link, spent an hour talking about their childhood friend, whom they loved. He developed MECFS, the disease I suffer from, and later he was diagnosed with testicular cancer. Rhett and Link visited him while he was battling the cancer. They were very religious at the time, but their friend wasn’t. And because he wasn’t, they felt the need to convert him before he died. As they described, they felt a need to save his soul because they loved him and were worried about what would happen to him in the afterlife. Their friend wasn’t very receptive to their attempts however, and at one point his sister asked Rhett and Link to stop preaching to him. So they did. Eventually their friend passed away, and now looking back on it years later, they felt remorse for having pressured him.

It’s obvious that they were coming from a good place, yet I couldn’t help but put myself in their friend’s position. I would have been disappointed that my friends were spending my final moments on earth trying to convert me to their religious beliefs.

This is all to say, there’s an art to not accepting unsolicited advice. Sometimes it’s just easier to pretend to accept the advice. I’ve certainly done that, but I almost always resent it afterward. Then I explode and unleash a harsh reply on some poor soul who was “just trying to help.”

The alternative is not taking it seriously, laughing it off. I don’t know if that’s the best way to deal with unsolicited advice. But so far it feels like the best way, maybe the only way, to preserve my sanity.

It’s the only way I can cope with the fact that some people will never get it. They’ll never stop forcing their opinions on people. But they really should stop. For everyone’s sake.

2. For those who haven’t heard, my memoir, WHEN FORCE MEETS FATE, is going to be published in January.

You can read sample chapters, add it on Goodreads, and preorder it through online retailers, in both print and ebook. The audiobook will be available for preorder soon. Here’s a list of places to order the book (by country):