The Process of Proving I am Sick 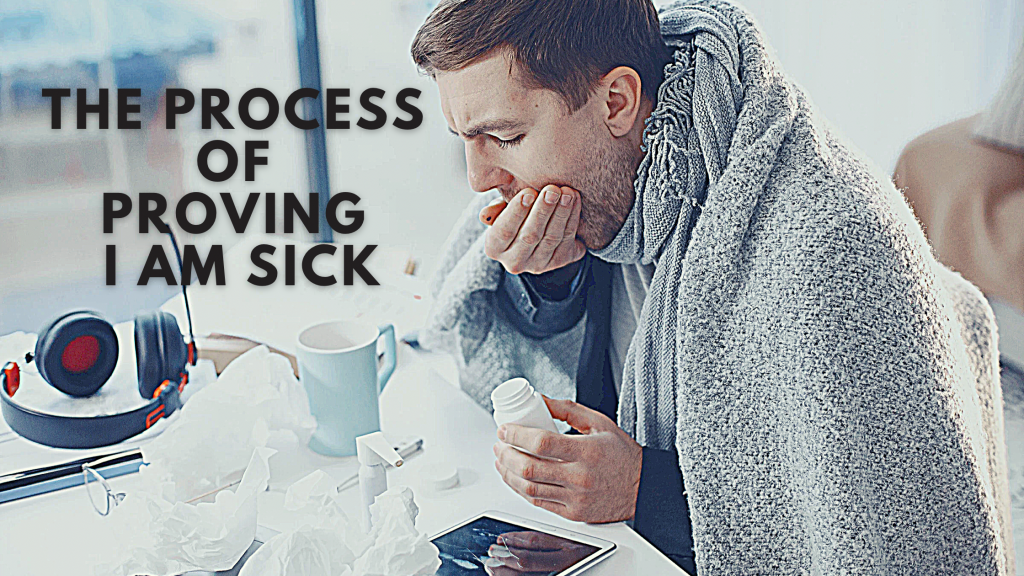 The last few months have been rough. If you follow me on social media, then you know that I have been going through a brutal intake interview for In-Home Supportive Services, which provides me with caregiving hours. You may also know that the intake interview did not go well.

I’m in the process of appealing the outcome, and once things settle down, I will have more to say. But for now, I want to discuss something that I was reminded of during this process.

Throughout the interview, I was required to demonstrate, both verbally and physically, how sick I am and the limitations that my illness imposes upon me. The irony of this is that in order to prove how sick I am, I had to make myself sicker.

The case worker performing the interview didn’t seem to understand my illness. I tried to explain that my illness is not a steady thing. It’s unlike disabilities that are the same from one day to the next. My illness varies from day-to-day.

On good days, I might be able to sit up and even take a few steps. On bad days, I’ll be lucky to be able to get out of bed and take my mobility scooter to the bathroom. Standing up is out of the question on bad days. And lately, because of the stress and exertion of this intake process, there have been an exceeding number of bad days.

No one should have to put their illness on display like an exhibit at a science fair. But because many chronic illnesses are invisible — the symptoms are not clearly noticeable — we often have to do just that. We have to push ourselves to the brink of exhaustion just so someone can catch a glimpse of what we’re going through. And then whoever is observing us carries on with their life while we are confined to bed for days or weeks, recovering from proving the legitimacy of our illness.

It reminds me of a story Michael J. Fox told in one of his memoirs. He was reflecting on a time when he testified before Congress about his Parkinson’s disease. And in doing so, he chose not to take the medications that improved his condition and made it manageable, more or less.

Because of this decision, his illness was on full display for the politicians in the room and the people watching on TV. His hands were shaking. His voice was wavering. It was scary, but that was the reality of his illness.

Because Fox had not taken his medication, some people, mainly idiots like Rush Limbaugh, said that he was putting on an act, that he wasn’t being truthful about his illness. In reality, he wasn’t just being truthful, he was risking his health for the sake of being truthful. He was giving people a glimpse at the worst of his illness and making himself sicker in order to do so.

Six years ago, I was completely bedridden — unable to lift my head off a pillow, too weak to eat or speak. Now my health has improved some, and I can get out of bed and speak for short amounts of time. But when it comes to proving how sick I am, I have never struggled more.

When I was at my sickest, it was easier to show others how sick I was. More people believed me because no one in their right mind would go without speaking or eating just so people thought they were sick. No one would stay confined to bed literally all the time just to get sympathy or money or whatever. But now that I can get out of bed, things are more complicated.

At first glance, it’s not always obvious how sick I am. But if you observe me for any significant amount of time, it’s clear to see that I am not a healthy person. You won’t see me eating in restaurants and going to concerts and seeing movies and watching ball games and swimming in oceans and hiking mountains and running on beaches and flying in planes and getting married and having children and doing all of the other things I would do if I were healthy.

And that, my friends, is all the proof I need. I so badly want to live a healthy life. I want to be active. I want to move. I want to do everything I can as much as I can. And yet, that mentality is at odds with my illness. To minimize my symptoms, I must rest. I must ask for help. I must delay. I must do things later, when I am feeling better.

Even still, here I am, more than a decade into my illness and still having to prove that I’m sick. It’s a soul-crushing, pride-swallowing process that won’t stop as long as my illness exists. I hate it. But perhaps one day it will stop, and I’ll no longer have strangers judging how sick I am.

That will be a good day.

3. Order my memoir, WHEN FORCE MEETS FATE, which recently won an IndieReader Discovery Award for best nonfiction. If you’d like to support the book (and this blog), please order a copy and leave it a review on Amazon. The book is available from:

6 thoughts on “The Process of Proving I am Sick”