Gym Tales: The Guy In The Wheelchair 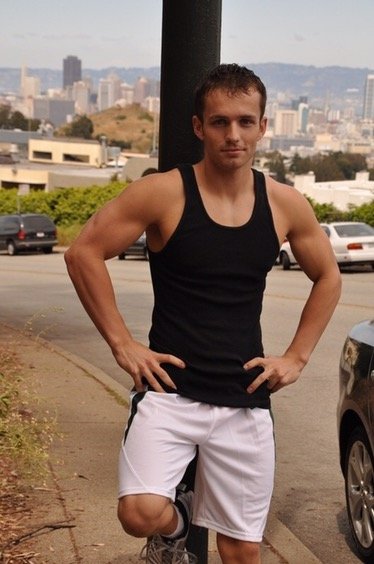 “Excuse me?” a soft voice says coming from behind me.

I slowly turn to face a woman wearing matching workout attire and a disgusted look on her face.

“It seems the gentleman in the motorized wheelchair, um, well, it looks like he’s . . . he’s tracking feces all over the gym,” the well-mannered woman says as I try to rouse myself from a daydream.

“The guy in the wheelchair?”

“He’s traipsing his own feces everywhere.”

I will never forget that interaction. It took awhile for the thought of someone smearing his own bodily waste on the floor to register with me. After all, dealing with human feces was not, as I understood it, in my job description. Besides, how could a man, albeit an incontinent man in a wheelchair who was unable to walk, leave tracks of feces everywhere? My first thought was he would have had to, well, hold on, hold on . . . let me give you the backstory first.

Before I was a trainer I worked the front desk at a very large chain of gyms whose name just so happens to correlate with the number of hours in a day. Okay, all right, I’ll just say it, I worked the front desk at 24 Hour Fitness (they can’t sue me if I have no money, right?). The building I worked in was an old mill with original brick work and exposed steel beams. It was a joy to look at. The job, however, was not a joy.

Before we get to the meat of this story, I want to mention how odd it was to work for a company whose name suggested it was open 24 hours a day when, in fact, it closed twice a week. In other words, one would think the gym never closed, but it did every weekend evening at ten o’clock, which made my job exhausting.

Not only did I have to clean the entire gym, re-rack all the weights, and lock up before closing, I regularly had to explain to disgruntled members why our operating hours directly contradicted the company’s name. I would unenthusiastically say, “Yes sir, I know what the name says. No, I don’t know why we close early on weekends. I don’t make the schedule.”

While working for the company, it would offer ridiculously cheap memberships on a promotional basis. This would attract people who couldn’t normally afford a gym membership, like homeless people. These individuals would strategically use the facilities to shower, stay warm, and store their belongings. A smart move in my opinion, but they too were outraged when alas they found out the gym closed, leaving them with no place to go. One such individual of special note was an octogenarian who, as far as I knew, lived in his wheelchair. He was almost always accompanied by his son, who didn’t seem to be very nurturing. The son was a middle-aged man who appeared to not bathe often, had matted hair, and always presented the demeanor of a meth addict. The father, on the other hand, was unable to speak, so I didn’t know much about him except, well, that he had horrible aim when defecating. For that reason I grew accustomed to calling him “the poop bandit.” Let me tell you why . . . .

As a front desk employee I got paid minimum wage, which at the time was $8 an hour. I was a college student; fine, a low wage is to be expected, but damn did the company get its money’s worth. Let’s see, first there was no sitting allowed — none whatsoever. And management made this clear by not providing a chair for front desk employees. But still, even leaning or sitting on the cylindrical desk was forbidden. Every time I even thought about sitting down, a posture Nazi came out from his lair in the sauna to repeatedly beat me with one of those elastic exercise bands. I’m kidding, but really, I did get yelled at a lot.

Next, I had to clean the bathroom every hour, on the hour. As someone who frequented the gym I appreciated this amount of cleanliness. That said, how ’bout paying a guy more than minimum wage to clean up poop? Ah, now we’re getting to the good part.

So every hour I would walk into the guys’ bathroom, making my way through a crowd of naked bodies with greasy overgrown hair, then an overwhelming conglomeration of a dozen different cheap colognes. I would then proceed to wipe down every surface, encountering more body hair and debris. But my favorite part was trying not to retch every time I had to wipe up a mysterious bodily fluid. Saliva was a pretty regular occurrence, but every once and awhile I’d find a bulbous glob of congealed yellow, green, or worse, off-white fluid that made me want to not only quit my job, but burn down the entire building.

On one particular day I was attempting to sleep standing up, which is almost possible when you hate your job as much as I did. So I was rocking and swaying, then the nice lady mentioned earlier taps me on the shoulder.

She tells me an elderly member of the gym used one of the toilets, or tried to, and instead stepped in his own poop. Oblivious to the mess, he mounted his motorized cart and somehow managed to run over more feces leaving brown tire marks all over the gym.

As you might imagine I was thrilled at the news, and my first task was to find the incontinent man. One might think this would be easy considering he literally left tracks everywhere he went, but I couldn’t find him anywhere, and by the time I got back to the front desk, sure enough, there were brown tire marks leading right out the front entrance. No joke!

So there I was with a gym full of poop and nobody to blame. What did I do? I geared up with every protective layer I could find, no hazmat suits unfortunately. Then I got to work scrubbing the bathroom clean. The one bright spot was I got to pass on the task of cleaning the rest of the gym to the night custodian who, when he showed up for work, looked like he just ate an apple full of maggots, or well, someone asked him to clean up human feces.

3 thoughts on “Gym Tales: The Guy In The Wheelchair ”