How to Become Ambidextrous 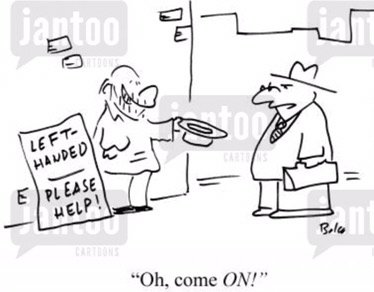 I’m not here to teach anyone how to become ambidextrous, but I will share how I did, however unintentionally and unconventionally. I suppose it answers the question, “Can you learn to be ambidextrous?”

I did. It was not fun. But the result was kind of cool. I guess.

“It was a shock to have my life interrupted by a very real health problem. I’ve always taken great care of myself and I was pretty sure that was supposed to count for something.”

I’ve always been a righty. When I played baseball in high school, I batted and threw right handed. I always used my right hand to write, and pretty much anything else you can imagine I did right handed. But almost everything I tried to do with my left hand I was terrible at. Actually, not just terrible, I was clumsy and awkward and kind of resembled someone with full-body numbness trying to have good coordination. I remember playing basketball in middle school and trying to learn how to do a left handed lay-up. My coach might as well have asked me to drive blindfolded.

My struggle with all things left handed quickly turned into jealousy, and sometimes even disdain, for people who could more actively use their left hand. My jealousy appeared every time I saw a lefty hit a home run or finely chop vegetables, but my disdain grew every afternoon as I sat watching my chemistry teacher write her lecture notes on the overhead projector, which I desperately tried to copy down before she moved on. This was a challenge not because she was hasty, but rather because she was left handed and her forearm and shoulder blocked my view of everything she had written.

How to Become Ambidextrous in The Worst Possible Way

In these formative years I never thought I would develop good coordination with my left hand, and for the most part I was fine with it. But if, for some reason I did imagine becoming ambidextrous, I certainly never thought it would come as a byproduct of being sick. After all, how could a sick person possibly become ambidextrous? Learning new skills isn’t a top priority for us sick people.

Several months ago I started getting daily IV infusions and subsequently needed the placement of a peripheral IV every week. To give my veins a break I started switching arms. In turn, I would sometimes have the IV in my right arm. Because the IV was often placed in an awkward part of my arm — essentially anywhere that a vein is closest to the surface and most visible without any valves in the way — I often had limited use of that particular arm. Sometimes I only bent my arm a few times a day so the joint wouldn’t lock up and so I wouldn’t disturb the IV, risking a clot or dislodging the catheter. When the IV was in my right arm, for example, it meant I had to do pretty much everything with my left arm. In fact, many of the posts on this blog were not only written on a small iPhone with a greyscale screen, they were done so using only my left hand. Hey, where’s my award? I know, I know, I would try out for America’s Got Talent, but I think there’s a verbal aspect to that gig I’m just not quite up for yet.

Anyway. I recently found an app that lets users write handwritten cards on a smartphone. Then the company prints and mails the card to the recipient. I know, why not just grab a pen and write it myself? Well, because I have a lot of post-exertion exhaustion and pain, the weight of the pen and energy used to craft words with it, make handwriting impossible for me at the moment. So I’m thankful for the app. But still, it’s not without difficult, especially when I have an IV in my right arm.

The other day, for instance, I started to write a card and realized I had to use my left hand. To my surprise, I wrote fairly well. Okay, that’s a lie. When I say “fairly well,” I really mean a five year old could still write better than me. Nevertheless I’m impressed with how I’ve become somewhat ambidextrous. It’s something I never would have imagined prior to getting sick. So I guess that’s something.

*Have you ordered your “Show M.E. The Money” shirt or hoodie yet? There are all kinds of cool colors,

9 thoughts on “How to Become Ambidextrous ”