The Other Dr. Seuss Thinks Trump is Quite the Grump 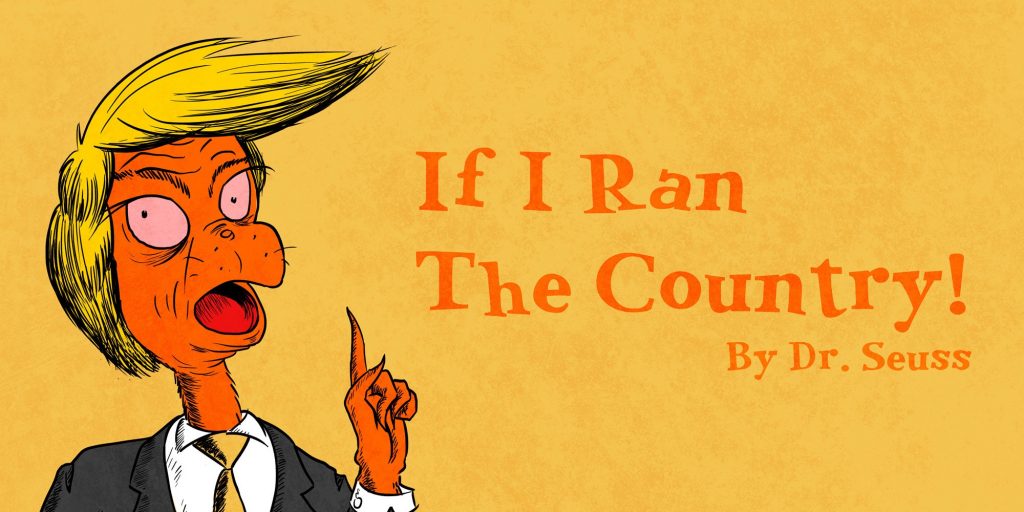 The oldest of the Seuss men.

I never lived up to my brother

Or so said my mother.

A warm greeting to all.

Boy how I wish we were meeting last fall.

It has fallen on me with a giant thump to evaluate mean Mr. Trump.

He continues to wage despite his old age.

I won’t stop till he’s locked up in a cage.

So I won’t charge my fee.

This, my earnest of work, comes straight from my conscience.

I just hope with Trump I can remain conscious.

By now we’ve heard from shrinks with links to Harvard and Yale.

Now it’s my turn to speak to this old angry male.

His skin is orange, it surely is.

I must find what’s wrong in that head of his.

I hope there’s a rational mind under that awful toupee.

But we can’t be sure as he’s hell-bent on a global melee.

I must say, I do not agree with Trump’s childish way.

This small-handed man is far from sane,

I’m not sure he even has a brain.

Trump is quite the grump.

Where his spelling is worse than the smell of dirty cat litter.

Given all that, I must meet this spoiled brat.

When I arrive I can’t imagine we’ll jive.

He is more frantic than a bee hive.

I will stay neutral in my evaluation

Despite his obvious preoccupation.

Keeping his attention won’t be easy.

I just wish he wasn’t so sleazy.

Mr. Trump is dangerous with his lies.

Yet he flies the skies denying his unwise Russian ties.

He is a paranoid man.

Oh and let us not forget his appointees:

And that Tillerson guy

Not to be short, soon I promise a full report

I will include notes about his mood swings.

Now before I depart

I have one final dart.

Let me lament about the president.

Democracy’s foe — he absolutely must go.

He must be gone by next spring.

If we let the digging be done

Then it will be as if he never won.

Thanks for reading my attempt at humor. Please subscribe for more posts.

2 thoughts on “The Other Dr. Seuss Thinks Trump is Quite the Grump ”