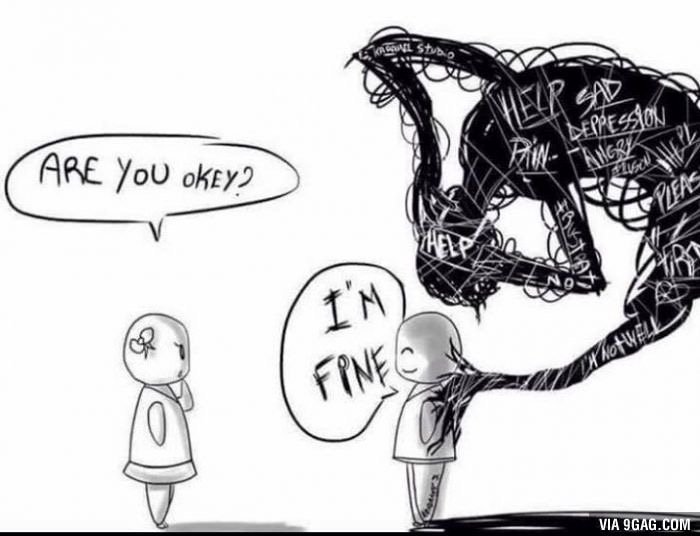 It’s easy to forget many things — names, dates, high school math concepts, when to take medications, etc. But it’s even easier to forget these things when your mind is always foggy because you have a chronic illness. My brain is constantly malfunctioning, so much so, when I actually experience a clear, fluid stream of consciousness I often wonder what’s wrong. That is to say that I’ve become so used to the symptoms of my disease (myalgic encephalomyelitis / chronic fatigue syndrome) — or rather diseases (Lyme disease, POTS, etc.) — that when they actually give me some relief I feel a bit bewildered. And not in a bad way. I don’t actually think something is wrong when I feel better, but I certainly do wonder what happened. What changed within my body to make me feel better? And please, quick, someone tell me how to replicate that change or at least ensure I don’t switch back.

But this feeling also pertains to when I start to feel worse, as I have lately. Up until two months ago, my health had been steadily improving. But at some undetectable point in the last two months I started to regress. I suppose it started when I could no longer put my feet on the floor and stand while leaning on the side of my bed. But more recently I have started “crashing” with even lower amounts of exertion. The saddest part about all this is that I just bought a wheelchair (with the help of many wonderful people) but I haven’t been able to get out of bed in the last two weeks to use it. It’s one thing to have your health take a dive, but it’s an entirely different, and much harsher, issue when you buy a $3,000 wheelchair that you were just getting the hang of, only to lose the ability to use it. It’s like buying a Ferrari and not being able to drive it. Well, no, it’s not like that because a wheelchair definitely isn’t a sexy Italian sports car, but I digress and hopefully you get the point.

It’s hard to accept that my health may not stay on the relatively linear path it has been on, but it’s also easy to forget that this has happened to me before. Many times. I can’t even count the number of times my health has ebbed and flowed over the years. But even more so it’s easy to forget precisely what it felt like to be at my sickest point.

Perhaps my forgetfulness is a coping mechanism, or perhaps it is indeed just forgetfulness, albeit a mental lapse that only accompanies a chronic illness like ME/CFS. Either way I forget exactly what it was like to be so sick. I remember being stuck in a dark room, sure, but I don’t remember the conglomeration of emotional and physical feelings that encapsulated that moment in time for me. I remember that I couldn’t eat solid food, but I forget what it felt like when I tried to chew, or even thought about doing so. All I remember is that I physically could not eat, and if I know myself at all, I know that the pain, and other types of misery, that kept me from eating must have been immense, certainly unbearable, because I like to eat and I don’t like to be told “no,” especially by my own body.

This is all to say that forgetting how it felt to be so sick was not a simple thing, and perhaps that’s why it’s hard to remember. Externally my body was almost entirely motionless, but internally there was so much going on it would have been impossible to describe it all, let alone remember what it felt like today. It would have been like standing in a crowd of a thousand people, and then afterward, trying to remember what each person’s face looked like. The truth is nobody could remember everyone’s face in such a crowd because one could only see a fraction of the faces. The same is true for the war that was waging on inside my body. I can’t remember exactly what it felt like because I wasn’t able to describe everything I was feeling at the time — both because I was aphonic and because it was overwhelming — in fact, I probably wasn’t even aware of everything I was feeling and I definitely wasn’t aware of everything, or even most of, what was happening physiologically in my body.

Now, while I am still far beyond that level of sickness, I find myself in a familiar and scary position — bracing myself as my health declines, hoping that the bleeding stops soon, or at least lessens before things get too messy. It is a situation that reminds me of how sick I’ve been, but not of what it felt like. The truth is I don’t want to remember that feeling because I know the only way I can truly remember it is if I become that sick again.

A couple days ago I sat up in bed and hung my legs off my bed. I saw the blood rush to my feet, turning them purple. It was something I have been doing for months with relatively mild physical repercussions. But my most recent attempt lasted all of a minute before I became sicker and had to return to my pillow. And even worse, I spent the following hours recovering in a horrible malaise. A few short months ago I was able to do so much more with lesser repercussions. It is humbling to acknowledge such a comparison and a reminder that although I certainly could be better, I could also be much worse, and being stuck in the middle, well, it isn’t all that bad.

Thanks again for reading! Please support my blog!