Nobody is Going to Take Your Guns Away, but Mass Shootings Have to Stop 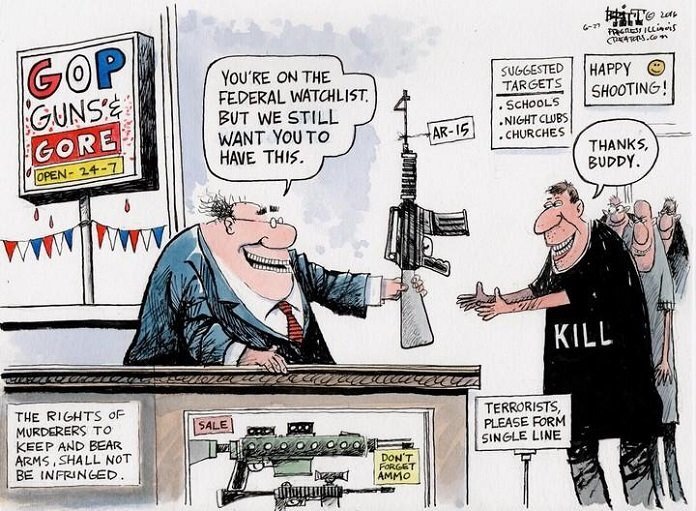 My friend, Erica Verrillo, recently posted on Facebook about the mass shooting in Las Vegas. She wrote, “… how many of the angry white men who have been riled up by Trump will decide to ‘snap?’”

She was, of course, referring to Stephen Paddock, the man who opened fire on a concert crowd of more than 20,000 people in Las Vegas on Sunday. I’m not sure snapping is a decision; I think it’s a reaction, often instinctual, but as she pointed out in her post, the Las Vegas shooter, as well as pretty much every person who has carried out a mass shooting, did not “snap,” as the media portrayed him doing.

This man bought an arsenal of guns that was so far beyond the firearms used by “militia” and mentioned in the Constitution’s Second Amendment. What’s more, this man devised a plan that included renting a large hotel suite and an adjacent room, both with windows serving as the perfect sniper’s den overlooking a music festival full of people. He didn’t snap, he premeditated. Snapping suggests that what he did was not premeditated, but it, as most mass shootings have been, was entirely premeditated. It was, in fact, more than premeditated. It was strategic and tactical, and, as far as horrific acts go, it was ingenious. But it was the kind of cleverness that, throughout history, has only resulted in a victory for evil — the same cleverness that let the Nazi’s dupe the world at the 1936 Olympics and then go on to carry out the Holocaust; the same cleverness that saw a man dressed as the Joker open fire on a movie theatre full of people only a few years ago.

After the many mass shootings in recent years, there has been public outcry for stricter regulations on the sale and purchase of firearms. Still little has been done in the way of legislative measures. This is because many supporters of the Second Amendment fervently oppose changing existing gun laws.

Following the Sandy Hook and Newtown shootings, firearm sales skyrocketed because people were afraid guns would somehow become illegal and be taken off the market. Now gun company stocks are experiencing a similar boom.

Some of the people behind these trends are scared. Not necessarily that another mass shooting will occur, but scared that their guns will be taken away. They fear that the government will actually enter their homes and confiscate their guns.

The truth is that will never happen. Nothing even remotely close to that will ever happen. Even if we had the most liberal president in office, that would never happen because the Constitution says it can’t happen.

The shooting in Las Vegas should be the catalyst for increased gun control. We can’t outlaw guns or take existing gun purchases away, but we can make it so that if a madman like Stephen Paddock devises a plan to open fire on a crowd of 20,000 people, he will have fewer and less powerful weapons. And unfortunately, given today’s political landscape, that’s about all we can hope for.

If the evil man perched on the 32nd floor of the Mandalay Bay had, say, two guns, and none of them were even close to automatic, and he had limited ammunition, many lives would have been saved. And isn’t that worth more than some Average Joe being able to buy a gun only our soldiers (militia) should have? Isn’t even one life worth more than someone having an arsenal that has no purpose other than to provide an adrenaline rush at a shooting range, or in Stephen Paddock’s case, kill more than 50 innocent people and injure more than 550 others?

Jimmy Kimmel did a monologue following the shooting and among the many things he said was one call to action that stuck with me: “Love and prayers aren’t enough.” All the luminaries in the world can offer their prayers, and the president can give his “warmest condolences”, but that isn’t going to prevent the next mass shooting, and it certainly isn’t going to bring people back from the dead.

Lastly, because we all could use a laugh, here’s a bit of satire in an incredibly dark time.

7 thoughts on “Nobody is Going to Take Your Guns Away, but Mass Shootings Have to Stop”