Awhile ago I posted a photo on Twitter of Betty Ford affectionately and adorably hugging her husband, President Gerald Ford. Soon after someone commented, “Drunk?”

My initial reaction was to tell them to fuck off. I wasn’t drunk. I don’t even drink. I can’t, my illness doesn’t allow it. Although sometimes I wish it did. And why do I have to be drunk to post a photo of Betty Ford? Because I’m a liberal and her husband was a Republican president? I was pissed. I wanted to throw something. 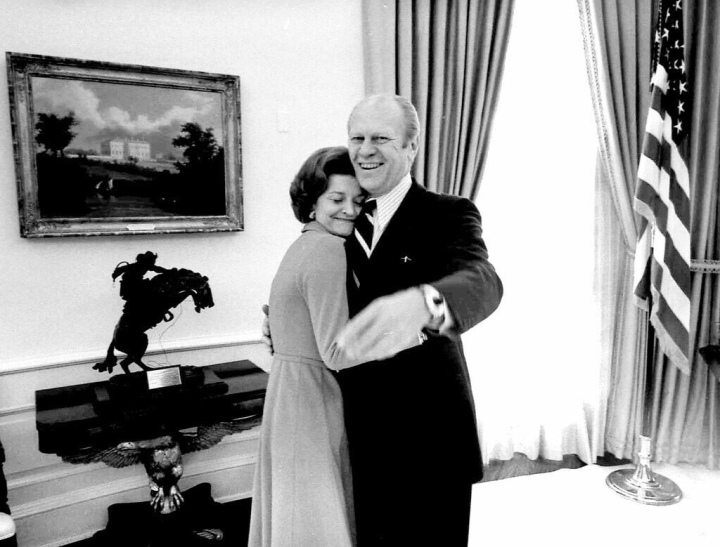 I was obviously overreacting. But I wrote back: “Huh? I don’t drink.”

Then the person replied, “She was drunk.”

I found that to be a bit mean and at the very least a big assumption (Betty Ford was an alcoholic, but that doesn’t mean she was drunk in the photo). But I still shook my head at myself. Not because I was agreeing with the person making light of her alcoholism (I actually really like Betty Ford. She was the first First Lady to sleep in the same bed as her husband, talk about her sex Life, and advocate breast cancer awareness after her mastectomy, which saved many women’s lives by urging them to get mammograms).

The reason this Twitter exchange made me shake my head was because of my initial reaction. It was impulsive and a little embarrassing. I was in fight mode from the moment I read the subtweet. But, like Betty Ford’s underlying alcoholism, my reaction had very dark origins that put me in a constant state of fight or flight, emphasis on fight.

As Danny Trejo recently said about life in prison, there’s no anger, you just go straight to rage. Most of the time that’s how life feels to me — I wouldn’t say I get angry, I usually just go straight to a burst of rage. And once I go to that place, it often gets worse. It’s like the rage builds and builds without me even knowing it, and then it explodes through my body in a catastrophic moment. Then, I’m stuck facing the repercussions of a very sick and very angry body that is just waiting to erupt again, waiting for something, anything — a fly to buzz nearby, the wind to blow a door shut — so it can continue to rage.

And I suppose I’m not as innocent as I make myself out to be. Sometimes I consciously allow myself to go down this path of rage. I mean, let’s be honest, there are more arguments on social media these days than can possibly be won. Yet I still get sucked in… What’s that? You say Jeff Sessions fired Andrew McCabe because it was recommended by someone from the Obama administration? Ah, go fuck yourself. Or at least that’s my initial reaction. Then, after a brief pause, I remember: Oh, right, I really don’t give a shit about any of this. I don’t care who Trump fired this week or how his supporters justify it. But my brain has become wired to dive head first into the fight. Any fight.

Even if someone says something obtuse, not necessarily offensive, my mind immediately turns it into a slight against me. The dangerous part is that I usually react in a combative way and that usually means hurting myself by letting the cortisol build up in my body and because I’m low on the vital hormone, it only makes me sicker.

Then, if I’m really amped up, I’ll yell or throw things at the wall, which is a horrible idea for someone with limited speech and strength. It only injures myself on top of getting sicker.

Whether it’s a face-to-face interaction or a Twitter spat, these exchanges and the reactions they cause in my body, have made me think back and really consider the underlying causes from my past.

If we’re talking about the cause of PTSD, or being stuck in fight or flight mode, or whatever you call it, it’s worth mentioning that the entire country is probably dealing with some version of this, especially those who have endured discrimination and hate as a result of the current administration. It seems we’re all on edge and looking for a fight.

So maybe I have a little of the Trump trauma going on, too. But more so, my trauma likely started in 2009, a year and a half before I got sick with ME and Lyme. I was in a fatal car accident, which I’ve written about on this blog before. My physical injuries were very minor, nearly nonexistent, really. It was pretty remarkable considering the severity of the crash. But in retrospect, there very well could have been some serious underlying complications from the accident. And I’m talking about more than just the psychological trauma of having ended someone’s life, although that is immense.

If there was one thing I could have done differently immediately after the accident (besides not inexplicably exaggerate the speed at which I was driving when asked by the police) it would be to have my brain and nervous system checked for damage. I’ve actually never had a brain scan, not even since I’ve become sick. But had I done one back then, not only would it have given me insight into any damage done by the car accident, it would have also given me a comparison to the current state of my brain. Oh, and the car insurance would have covered it. Damn!

One day, hopefully soon when I’m able to travel, I want to get a brain scan in the hope that it will still show an abnormality that will at least shed light on my condition. Awhile back, I heard an episode of Joe Rogan’s podcast in which he interviewed a doctor who was studying how some people with physical brain trauma ended up with PTSD. I often wonder if such has been the case for me after I hit my head during the car accident.

I think a brain scan might show something abnormal in a similar way. Maybe not the same as a football player or soldier, but maybe to a lesser degree. If so, I can’t help but wonder why people like me end up sick and bedridden while others with PTSD are still able to walk and talk. I imagine it’s because they do not acquire a slew of other illnesses like I have.

Stuck in Fight or Flight

Recent studies on the brains of people with ME/CFS have shown abnormalities. I seem to remember one out of Stanford showed increased gray matter (whatever that is). Whether such abnormalities will one day correlate to PTSD and the fact that I feel like I’m always stuck in fight mode, I don’t know. I suspect they will.

Like most people, I’ve heard about the struggle of post-traumatic stress syndrome. But oddly enough, it never occurred to me that I might actually have PTSD from the car accident until recently, when people started suggesting that it might have contributed to my illness. I have no idea whether this is true, or even possible, and I don’t think even the best doctor or medical technology can tell for sure. But even if it is true, it’s important to distinguish between “caused by” and “contributed to.” It’s possible that PTSD contributed to me getting and/or staying sick. However, I don’t think it’s possible that my illness was cause by PTSD.

My PTSD goes far beyond the car accident. I have a lot of trauma that has stemmed from being sick. There is intense trauma that accompanies not being able to eat solid food and communicate my needs with caregivers. These things ignite a primal, visceral fear within me that has led to profound trauma. And I’m pretty certain that trauma has caused me to get stuck in flight or fight mode. Usually fight mode. After all, I can’t take flight. I’m stuck in bed. I can hide under my blankets, but that’s about it.

I also find myself panicking way more often than I used to. I live in fear. The fear of getting sicker, making myself sicker. I fear germs and new medications will make me sicker. And I panic when I think they have. But I do my best to live as normal as possible. I push aside the panic, PTSD, OCD, and a bunch of other acronyms, in order to seem untainted by the shit life has thrown at me. But on the inside I’m a wreck. So much so it’s probably to my advantage that I can’t speak more. If I could then people would probably know the true depths of my inner turmoil.

If I had to guess, the feeling of constantly being on edge, not letting innocuous stuff go, and getting sicker because of it, is caused by a tangled web of PTSD and poor physical health. I think severe adrenal dysfunction and a lack of essential hormones also play a big factor. Oh, and as my mom says, I don’t have any filters, which is so true. I used to have all kinds of filters that allowed things to float over me and fade into the abyss, or go wherever meaningless shit goes to die. I used to be able to workout, or have a beer, or go to the beach. Now I’m just here in bed looking at walls I want to punch.

Do I have an answer to how to make it better? Absolutely not.

All I know is that I’m doing everything I can to treat my PTSD. I’m taking hydrocortisone to boost my cortisol levels. I’m treating associated health issues. I continue to try new treatments. I meditate, sometimes. I breathe with my belly. I try not to yell or throw things. And most of all, I try to be kind and gentle with myself and other people, even though I sometimes fail. I’ve been through some incredibly awful shit in my life and I want to give myself, and the people around me, the slack needed to deal with that. Sometimes that means crying five times a day. Other times, it means saying fuck it and throwing something against the wall, even if that causes my body to get sicker and I inevitably regret it. This is something I hope everyone dealing with PTSD and chronic illness allows themselves to do. The stricter you are with yourself, and the more you try to fight the repercussions of what you’ve been through, the more exacerbated your issues will become. Hopefully one day soon we’ll have better ways to treat these issues and a better understanding of how PTSD and physiological illnesses are related. Until then, I’ll try not to throw any more things at the wall.

1. Thank you for reading! Please tell me about your experience with illness and PTSD in the comments section.