A Year of Pushing Too Much 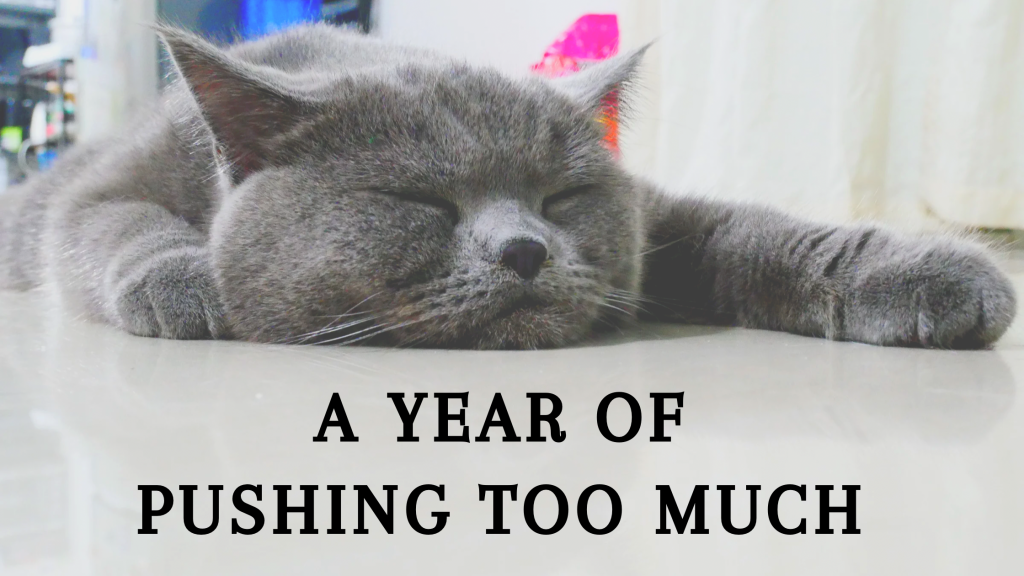 This year has been one long push. It began with selling our house in Tuolumne and finding a new one in Vallejo. My health hadn’t been so good in 2021, but by February of 2022, I found myself taking my first long road trip in a decade, even using some of my limited strength to secure a mattress to the car as we moved to the new house.

Throughout the moving process, I was amazed at how my body and health held up. I was very much involved in many aspects of the move, from gathering and submitting financial documents for the home loan to literally lifting part of my mattress over the threshold of our new front door. Of course, I did all of this either from a wheelchair or my bed. But I did it nonetheless.

As we got settled in to the new house, I began doing home improvement projects — filling gaps in the floor, cleaning the baseboards, even designing a bathroom remodel to make it wheelchair-accessible. I was surprised that I could do such things. After all, a year earlier I hadn’t even been able to get out of bed. Now I was zooming around in my wheelchair doing all kinds of things.

But the mental and physical stress of the move soon caught up with me. I began to get weaker, more nauseous, my muscles and joints filled with pain. And things kept getting worse.

When my new IHSS caseworker called to reevaluate my caregiving hours, I was having trouble speaking. The caseworker was skeptical and downright rude during the interview. She put me through a weeks-long process of proving the legitimacy of my illness, something I’ve had to do too many times throughout the decade that I’ve been sick. But this time it resulted in an especially bad outcome. The caseworker cut my caregiving hours by more than half, and the whole ordeal really took a toll on my health.

By the time the IHSS fiasco was done, my condition was significantly worse than the beginning of the year. We had just finished the bathroom remodel, and I was suddenly having trouble getting across the hallway to use it. I feared that I might lose the ability to take showers, a simple pleasure that I cherished after having to do sponge baths for a year and a half while I was bedridden. Prioritizing the use of the new bathroom, I cut back on many of my other activities, including riding around the backyard in my wheelchair.

Thankfully, by the fall, I began to regain some of the ground that I had lost earlier in the year. I wasn’t back to zooming around the yard in my wheelchair, but I was feeling a bit better. And this winter I actually began going for short drives in the car again.

While experiencing the ebb and flow of my health this year, I’ve been reflecting on what it means to push oneself too far, and the consequences of doing such a foolish yet sometimes entirely necessary thing.

The truth is that this year is not the first time I’ve pushed myself too far, but it is the most crucial. I needed to push myself too far. I needed to move to a new house and, in order to do so, I needed to get in a car and tie down a mattress and make it through a five-hour car ride. There was no way for me to anticipate all of the additional stressors that occurred this year—the home improvement projects, the IHSS ordeal—but I kept taking them on. I kept pushing, and eventually it caught up with me.

I backed off and was able to recover, but what if I hadn’t? What if I had kept pushing until I got as sick as I was five years ago? What if I became bedridden and unable to speak or eat on my own because I pushed myself too hard? Would it have been worth it?

This was, after all, a do-or-die type of situation, and I was prepared to face the consequences of pushing too hard, but most of the time, it’s not worth it. Most of the time, I end up pushing myself for foolish reasons because I’m tired of living at the mercy of my body and the direction of my illness. I’m tired of not being able to push myself as much and as often as I want, so I do it anyway, and I pay the price. I spend days in bed recovering after organizing my sports card collection, or I get short of breath and nearly pass out while tightening a loose screw on a door handle.

If you take one thing away from my year-in-review, consider the ways in which you push yourself and the consequences of doing so. Consider when it is worth it and when it is foolish.

I will say that even though the foolish times make little sense, and they often cost us dearly, sometimes they are almost as necessary as the practical times. Sometimes we just need to go for a ride outside or stay up late watching a movie. Sometimes we just need to be foolish. And the beautiful thing about being foolish is, while it may not last forever and we may come to regret it, at least we’re able to do it for a short time.

3. Order my memoir, WHEN FORCE MEETS FATE. If you’d like to support the book (and this blog), please order a copy and leave it a review on Amazon. The book is available from:

6 thoughts on “A Year of Pushing Too Much ”