An Abundance Of Eyewear 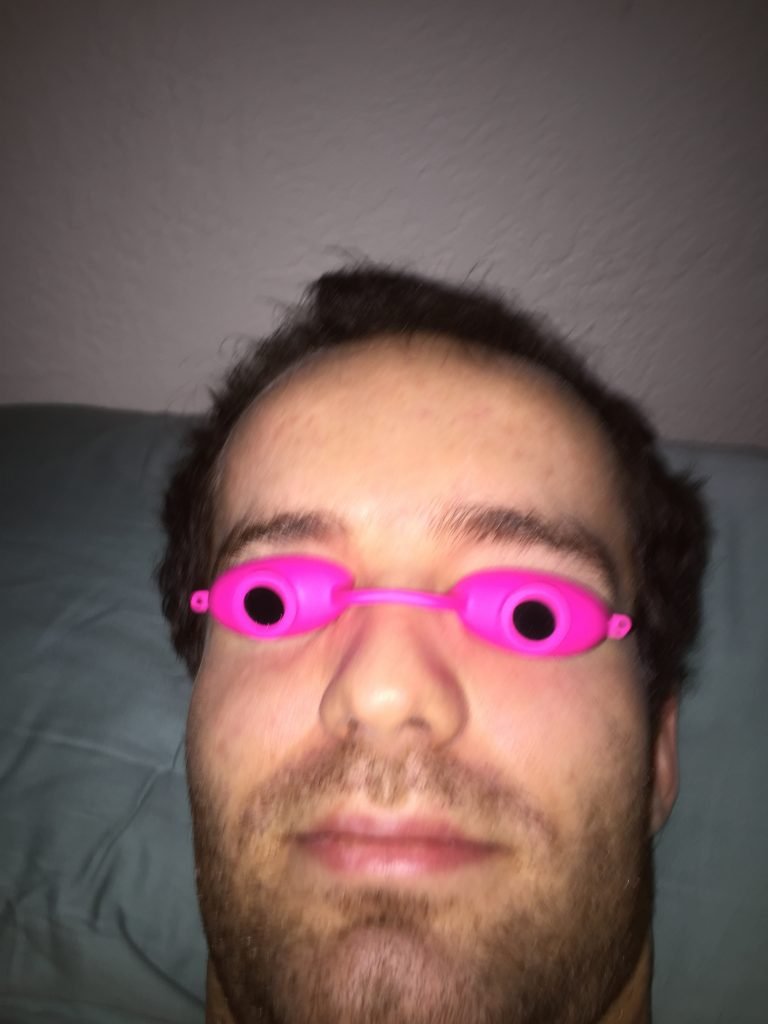 It’s fair to say most people know, or can at least imagine, that constantly going without exposure to sunlight can adversely alter one’s mental state. Well, I’ll tell you, it’s definitely true. Constantly living in the dark can absolutely jeopardize one’s mental health, if not completely destroy it. Piggyback that on top of a debilitating disease and you’ve got a perfect storm. But if living in darkness can harm someone’s mental health, so can the chronic pain and immense weakness people with MECFS feel when exposed to that same sunlight. It’s a lose-lose situation no matter how you look at it, all you can do is be proactive and hope things get better.

In my case, I’ve had to get crafty to maintain, and sometimes rebuild my mental stability. For months, years really, I’ve been teetering on the edge of mental instability, or what I believe it to be. But also, I’ve had to accept that my situation may in fact cause me to lose my grip on reality, and there may be nothing I can do about it. That is besides stay proactive and keep fighting my way through the struggle. Sometimes it seems like the guy who, in the 70s, walked from one World Trade Center building to the other on a tight rope. One false move and he would have fallen to a horrible death, but he eventually made it to the other side. Although when he did, he was still stuck on top of one of the tallest buildings in the world with a bunch of cops chasing after him.

Perhaps the most proactive thing I’ve done to limit my mental health issues from lack of sunlight, is adopt an abundance of eyewear. There are many things I’ve aspired towards in my life and wearing sunglasses indoors has never been one of them. I’ll be honest, my formative years were filled with lots of judgment. Harsh judgement of myself and others, much of which I kept to myself, but still thought nonetheless. This included a sort of subdued sardonicism for anyone wearing sunglasses indoors and/or at night. At the time I just didn’t understand it, mostly because the vast majority of people whom I’ve made fun of for wearing sunglasses appeared to be motivated more by fashion and vanity – not unlike someone wearing glasses with non-prescription lenses – than by health or functional reasons.

Never did I think I would one day need to wear sunglasses indoors. Six years ago when I came down with the worst case of mono ever, which still hasn’t gone away and has subsequently morphed into MECFS, light became increasingly harsh on me. I remember having to turn away from intense overhead lights and at times face a blank wall just to carry on a conversation or finish a task. As fun as it was to stare blankly at a bare wall, I soon adapted to the issue and started wearing sunglasses. I’ve always preferred to actually face people when talking to them so I figured sunglasses might solve the problem, as well as ease the other person’s discomfort not having to talk to the back of my head. I also wore sunglasses outside but that was far more inconspicuous.

Eventually I regained some health and no longer had a need for sunglasses. That is until October 2014 when once again my health started to slip and I quickly found myself falling back to using various types of eyewear. This time the light sensitivity became worse. I started wearing eye masks when resting and sunglasses during every waking hour, even at night and inside. When neither option was handy I would fold a sweatshirt hood, or place a hat over my eyes to shield them from encroaching light.
It was about this time that Ryan Prior filmed me for the second time for his Forgotten Plague documentary. I specifically remember being interviewed with a beanie covering my face. The footage didn’t make the film’s final cut, probably because I was wearing a beanie over my face. No body wants to watch a guy talk with a beanie over his face. Another time, I remember sitting with my family for Thanksgiving dinner, then playing a card game after. I was trying to concentrate with bright surrounding light seeming to tear into my brain. It got so bad at one point I couldn’t read the cards so I ended up playing the rest of the game with my sweatshirt hood over one eye as I randomly and mostly blindly played on.

These misadventures, however, kept me from the depths of lethargy and depression, and partially set the groundwork for how I kept my mind from going insane while being bedridden in a dark room.
Living life on my terms has been my only concession to concurrently living with an illness. And while my over-exercising, and other actions, prior to becoming bedridden may have ultimately led to the decline of my health, I would, without any doubt, do it all over again. And who knows, maybe my fate would have been the same regardless. Yes, I like that thought better. Let’s keep that thought.

As I just alluded to, in January 2015 things got really bad. I could tolerate no light whatsoever. That is among other things. Adapting again to my circumstances, I began wearing washcloths on top of the eye masks I had previously used. But at times it still wasn’t enough so I had to get resourceful. Using hand signals I asked someone to dig up an old pair of tanning goggles I had used at various tanning salons while I was preparing for modeling gigs and bodybuilding competitions in college.
Because it was so damn dark in my room, it wasn’t until a few months ago that I realized I was wearing pink tanning goggles, which may or may not have been mine, but for the sake of my masculinity let’s just say they were left behind by an ex-girlfriend. Regardless, I think pink suits me just fine.

The tanning goggles were certainly not the only piece of eyewear I tried. As my tolerance of light slowly improved over the months I actually needed more eyewear.

In the following months I tried welding goggles, which proved to be too heavy and difficult to put on for every day use. Although people told me I looked pretty badass.

Next I tried aviator goggles (and glasses), which looked equally cool but did not offer the protection I needed. I also tried post-eye surgery glasses (I have no idea what they’re called), which I most definitely did not look cool wearing. They were too bulky and made me look like a blind octogenarian. So finally I chose regular sunglasses with “super dark lenses,” and the pink tanning goggles. The tandem worked nicely. I’d wear the sunglasses when using my phone to communicate and the tanning goggles when staring at a blank wall or ceiling. It was perfect. Okay, it wasn’t perfect, but it worked.

The tanning goggles exposed my eyes to only a dime-sized amount of light and that light was filtered by some serious UV protection. So as one might imagine, trying to do anything that requires depth perception, or say, written communication was pretty much impossible while wearing tanning goggles. I did try however, and numerous times I made typos or literal blunders that Healthy Jamison would have rammed his head into a wall over. Instead I just let it go, so what if I sent a text message asking someone “How’s the bra?” when I really meant “How’s the beach?” And who cares that I replied to an email with “You’re almost sweet,” when I really meant “You’re always sweet.” To make myself feel better I blamed all the literal mistakes on my phone’s predictive typing feature, but to be fair it was probably only 90% my phone’s fault.

Now that my health is finally improving and my eyes are becoming less sensitive to light, my need for eyewear is diminishing. While my room remains pretty dark by normal standards, seldom do I wear sunglasses, and I rarely, if ever, use my pink tanning goggles anymore. While my phone’s screen remains fully dim and in grayscale, I no longer need to wear sunglasses to see it. Recently I even tried taking a few selfies without an eye covering, and although the camera flash was supremely bright, my eyes stayed open with the pain eventually dissipating instead of making me crash. For months people would take photos of me wearing washcloths, and sometimes two or three pairs of sunglasses (yeah, try keeping three pairs of sunglasses over your eyes at the same time), but now, for the first time in more than 18 months, I can see my eyes and smile captured in the photos. It makes me happy that after all this time I can still see and I can still smile.

7 thoughts on “An Abundance Of Eyewear ”