I had visitors this past weekend. It was the first time in months that someone from out-of-town has visited me, and despite what some of my other posts may suggest, it was certainly the most active I’ve been while being bedridden.

Stephanie Land, a wonderful writer and friend who works with the Blue Ribbon Foundation, came all the way from Montana with her daughter, Mia. Janet Dafoe and her daughter, Ashley, visited as well. The foursome drove more than three hours from the Bay Area to my house in the Sierra foothills, and while I know I wasn’t the only reason they made the trip, the visit was definitely the highlight of my weekend.

On Saturday evening, I spent a few minutes talking with each of my visitors, and when I say “talking,” I mean my lips moved and words, audible sentences even, actually came out of my mouth. I must clarify this because as I’ve learned while being severely ill, there are varying degrees of talking and I seem to have gone through them all. Unlike my past attempts at vocalizing, this talking was distinctly audible. It was a beautiful thing.

I had not met any of my visitors in person before Saturday. My interactions with Janet, although meaningful, were limited to social media and text messages. The same was the case with Stephanie, whose essays about Whitney, Janet’s son, I had read numerous times.

Janet was first to come into my room, she was just as kind and compassionate in person as she was during our virtual correspondence. She stood by my bed and we talked awhile. For me, it was a bit of normalcy in an unusual and often tortuous situation. But what I loved most about the time we spent together was how it was void of awkwardness, void of the fumbling of words and trepidation of what to say next in a conversation I’ve so eagerly awaited. My speech was limited, so naturally one would think the conversation might be more awkward, but the opposite was true. Perhaps it was because I couldn’t afford my usual quirky sayings, or my nervous tendency to elevate the awkwardness of a conversation by bringing up banal topics like the weather. Although, the weather may have been a good topic considering I haven’t been outside in nearly two years.

After Janet gave me a big hug and left my room, Stephanie came in and gave me an equally hefty hug. She sat on a stool beside my bed and we chatted for a few minutes. Again, the awkwardness never showed. It was like talking to a friend I’ve known for years. I could tell it was an emotional meeting for her. She had just come from Whitney’s house, where for the second time that I know of, she was unable to spend time with her dear friend because he was too sick. Then, there she was meeting me — her new friend — for the first time, knowing not long ago I too had been as sick as Whitney. It must have been hard for her. But maybe it gave her some hope as well. I so badly wanted her and Janet, and Ashley, to feel hope, to know that if my health can improve, so can Whitney’s. Because when I was too sick to communicate or move much at all, I kept thinking if he can dredge through this unbearable disease, so can I. We have never met, but I get a lot of strength from Whitney. We are, after all, in the same fight. 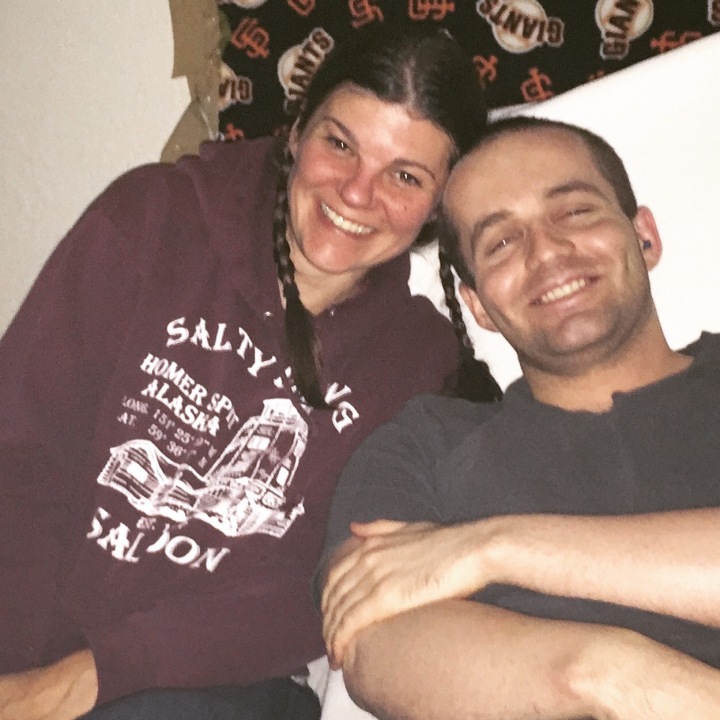 I proceeded to tell Stephanie how “Life’s gotten a lot better for me, but it still really sucks.” My sentiment was evident by my ability to actually speak those words, whereas six months prior I would of had to laboriously trace letters on Stephanie’s hand as she painstakingly tried to piece together the sentence. In other words, six months ago I wouldn’t have been able to express that thought, or any thought for that matter.

Ashley came in last with Mia. They were both very sweet. Mia shook my hand and talked to me for a bit before returning to her mom waiting in the living room. I really admired her intelligence and courage spending time with a sick person. At 10 years old I avoided sick people at all costs and when I did spend time with them, I was not nearly as gracious as Mia was with me.

Talking with Ashley gave me a look at the immense struggle her brother has now endured for years. I got a similar glimpse from Janet, but with Ashley I was able to commiserate with a peer who has seen the horrors of MECFS firsthand. I found comfort talking about everything from awful caregivers to what life was like before our families were stained by such an awful disease.

Before everyone left, I felt well enough to take some photos, which was a big moment for me considering just a few months ago I couldn’t take a washcloth off my eyes in daylight and at night I had to wear tanning goggles. What’s more, I even had the energy to talk while the photos were being taken (multitasking is almost always impossible for me). At one point, someone mentioned how I had a lot of women in my bed, and I was able to joke about how it was a record for me. Although that was a lie. There was the time I had two paramedics and a caregiver — all female — in my bed trying to get me onto a gurney, but for the sake of brevity I didn’t mention it to my guests.

My mom took the photos, so I made sure to save one last photo-op for after the group left. It was the first time in at least two years I had taken a picture with my mom.

The following day was a struggle both physically and emotionally for me. It was difficult physically because the sensory stimulation from the visit and the exertion from talking so much sent my body into a crash, which luckily only lasted a day and was well worth it. The physical and emotional toll of the visit was reduced to a mere inconvenience by the warmth I felt from the lovely women who visited me.

I seldom have visitors, both because I live in a remote area and because my health doesn’t always allow it, so this visit was absolutely worth the MECFS hangover. Sure, I could have paced my energy better. I could have talked less and used more hand signals to communicate, but I’ve never been one to overly choreograph my actions or micro-manage my interactions. I’ve always aimed to live on my own terms, not those of a disease that has taken so much from me. But at this moment, the disease has not taken my ability to communicate, and while I’m not always able to say everything I want, or fully vocalize my gratitude for visitors, I can supplement my speech with writings like this one.

*Hey! Please take a few seconds and subscribe to my blog below. Maybe leave a comment too? Thanks!